To some Asian Americans, the word banana represents more than just a piece of fruit. Instead, it is a slur that means “yellow on the outside, white on the inside.” I encountered the term in my high school and early college days, usually by international students who would laugh when I would identify myself as Chinese or Indonesian. “No, you’re just an American,” they would say. “You’re a banana.” As it turns out, plenty of Asian Americans were called a “banana” back in their youth, and were heavily influenced because of it.

Paradox, an Asian American sociopolitical student organization at the University of Illinois, took matters into their own hands and created a platform called My Banana Story. According to USA Today, “Paradox members’ Facebook profile pictures feature photos of themselves holding a banana to their head, which symbolizes a gun and each picture caption tells the members’ respective stories, featuring the hashtag #MyBananaStory.”

“This idea was to pose in a way where we’re committing suicide,” says Alex Wen, a co-founder of Paradox and a recent University of Illinois graduate. “Because [My Banana Story] is this idea of killing your own identity in order to conform.”

On the #MyBananaStory page, members detail their own experiences with being called a “banana.” For many, racialized taunts and bullying led them to assimilate into what they would think of as White American culture, only to feel a loss in identity when the slur was thrown back at them. Here is an example below:

“Racial slurs, death threats, and getting spit at was not what I was expecting from high school when I first entered during my freshmen year. After getting off at my bus stop, another student calls me a word I won’t write on here. But I respond rather passively, trying not to escalate the situation. However, he shoves me and calls me a “dirty chink” so I respond with some expletives. He goes on calling me more offensive and racial words, the usual targeted racial stereotypes like you smell gross because of your food, your eyes are too small, you sound weird and others that aren’t written as nicely as the previous ones. Normally, this would have constituted in punches being thrown. But despite the spitting, yelling, and shoving, I held back, because I believed what he was saying. It made me account my own social and academic failures to my culture rather than myself. So I changed. I tried to be as “American” as possible. A while later, my family visited Taiwan. I fell in love with my culture again. But once again, I wasn’t accepted. Every day I would play basketball at the same courts with the same groups of people. I was not seen as Taiwanese though. They clearly saw me as American through names, actions, and remarks. I wasn’t seen as American in America and I wasn’t seen as Taiwanese in Taiwan. I had no culture to identify with. I was a “banana” and it took me years to find myself again.” – Matthew Hom

#MyBananaStory is sparking discussions among Asian Americans as they share their stories and discuss the banana slur. Some people believe that the term can be reclaimed as a form of empowerment. Probably the most famous and vocal example of this right now is Eddie Huang, who embraces it and calls himself a “rotten banana.” As he writes in his memoir Fresh off the Boat (the same memoir that inspired the ABC sitcom starring Randall Park and Constance Wu), “Watching my white and Asian friends move away from hip-hop opened my eyes to this rite of passage that I was never going to join – the ascendance into whiteness. I was down with the rotten bananas who want nothing to do with that.”

Personally, I am not sure if the banana slur can reclaimed into a form of empowerment. What I can say is that I embrace the identity of being Asian American and multicultural. Today, I proudly identify as Chinese-Indonesian American, and no one can take that away from me. Not even myself. 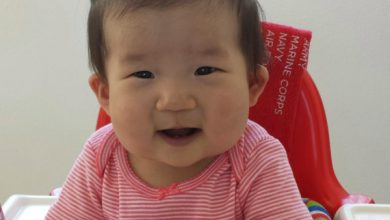 by JULIE HA Sixteen-month-old Olive Kang, the subject of a donor campaign championed by her aunt, actress Moon Bloodgood, passed away early Saturday morning, according to her family. Olive […]