The trade publication said the untitled project will be directed by Walter Hill.

Stallone will play a New Orleans hitman who teams up with an NYC cop in order to track down the killers of their respective partners. The action film will be shot in Louisiana and will begin shooting later this month, according to Variety.

This will not be the first time Stallone will work with a Korean American actor, let alone a KA actor with the last name Kang. In 2008, the man responsible for the “Rocky” franchise directed and acted in the fourth installment of “Rambo,” which also starred Tim Kang. 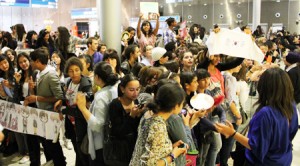 The popularity of Korean pop music, or K-Pop, has spread from Southeast Asia to Europe, as fans one thousand-strong descended on Charles de Gaulle airport in Paris on Wednesday […]