South by Southwest (SXSW) recently announced the second round of artists to be included in the 2015 SXSW Music Festival lineup, and it looks like numerous South Korean artists will be performing at the Austin festival in March.

For the past two years, there’s been a steady rise of Korean musicians participating at SXSW. According to KpopStarz, SM Entertainment girl group f(x) performed at the 2012 festival while Jay Park, HyunA, Nell, Crying Nut, Idiotape and other incredible artists performed in 2014.

This year’s SXSW currently has an impressive roster of 10 Korean musicians from a wide range of genres including K-pop, indie, rock, traditional, electronic and more.

Here are the Korean musicians joining the lineup:

Self-described as a “time traveling girl group,” The Barberettes sings 1950-60s American and Korean songs in a doo-wop style. Comprised of members Shinae An Wheeler, Grace Kim and So-hee Park, the trio is a relatively new group that was formed in 2012 for “fun” and rapidly grew in popularity. Their debut album released on May 27, 2014.

Bobby Choi, also known as Big Phony, is a Korean American indie singer-songwriter based in Seoul. He participated in last year’s SXSW and recently performed at the Cultural Collide with the Seoulsonic Tour. Earlier this year, he simultaneously released his electronic album LONG LIVE THE LIE, which reached No. 10 on the iTunes Electronic Chart, and acoustic album BOBBY.

Eastern Sidekick is a Seoul-based indie rock band that debuted in 2010. The band consists of Oh Ju-hwan on vocals, main songwriter Ko Han-kyul on lead guitar, Bae Sang-hwan on bass, Ryu Inhyuk on guitars and Ko Myungchul on drums. Dubbed as “indie dark horses,” Eastern Sidekick nabbed numerous rookie awards and performed at some of the most prestigious music festivals in Asia, such as Music Matters Live, the Summer Sonic Festival and the Pentaport Rock Festival.

Often described as the founding fathers of punk rock in Korea, No Brain has performed at more than 3,000 shows over the last 15 years. The punk band has been enjoying mainstream success in recent years and released a collaborative album this past September with Crying Nut, another influential, Korean punk rock band. This year marks No Brain’s third SXSW.

Founded in 2007, [su:m] is an instrumental duo that plays traditional Korean music. Park Jiha specializes in piri, a bamboo oboe, and saengwhang, a multi-layered mouth organ, while her partner Seo Jung-min plays gayageum, a 25-string zither. Their first album Rhythmic Space: A Pause for Breath released in November 2010.

EE is an electronic performance art duo consisting of members Lee Hyun-joon and Lee Yun-jeong, who are husband and wife. The married couple’s performances are often described as avant garde and combine music, fine art, quirky fashion and dance into highly stylized productions. EE became the first Korean act to ever perform at Coachella in 2011.

HEO is a K-indie electronic trio that is steadily rising in popularity. Their haunting music video “Luna” was featured on Vimeo as a staff pick. The band has previously opened for electronic band Love X Stereo, who performed at SXSW 2014, Culture Collide and CMJ Music Marathon 2014.

YB, also known as Yoon Do Hyun Band, is one of the most famous rock bands in South Korea, having sold more than 2 million albums. The band is renowned for their ability to mix traditional Korean music with hard rock and has headlined for top Korean rock festivals. According to Korea JoongAng Daily, YB is currently focusing on breaking into the U.S. music market after signing a contract with Doug Goldstein, former manger of the American rock band Guns N Roses. The band released their first English single Cigarette Girl in February 2014.

Victim Mentality is a glam metal band comprised of vocalist Crocodile, guitarist Sohn Kyung-ho, bassist Scorpion and drummer Tarantula. Despite being a relatively new band, Victim Mentality has performed at some of Korea’s most popular rock festivals, including Green Plugged and Pentaport. The band is currently prepping to release their first full-length album, Heavy Metal is Back.

Founded in 2011, Asian Chairshot is a rock trio that plays a mix of psychedelia, garage rock and alternative rock. The band was nominated for “Best Rock Album” and “Best Rock Song” earlier this year at the 2014 Korean Music Awards. Following their participation at the Singapore’s Mosaic Music Festival in March, Asian Chairshot launched their U.K. tour. The trio released their debut full-length album, Horizon, in May 2014.

The 29th edition of the SXSW Music Conference and Festival will take place March 17-22, 2015 in Austin, Texas. You can view the full list of announced artists here.

To learn more about festival, visit the SXSW website. 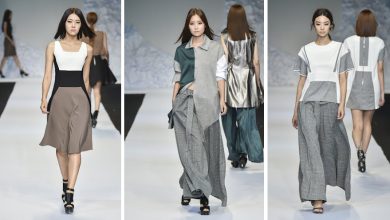 From Dries Van Noten to Peter Pilotto, color blocking is still making waves for 2015, and all the fashion weeks combined have produced some daring combinations and head-spinning […]