We have a first look at Cinemax’s upcoming series “Warrior,” based on original writings by Bruce Lee and co-executive produced by Justin Lin, Jonathan Tropper and Shannon Lee, Bruce Lee’s daughter.

The crime drama is set in San Francisco’s Chinatown, and follows a young martial arts prodigy during the Tong Wars of the late 19th century. The prodigy “becomes a hatchet man for one of Chinatown’s most powerful organized crime families,” according to HBO.

The series received a 10-episode order and is set to debut in 2019.

Shannon Lee found the writings on which “Warrior” is based in 1973, after his death. He wrote the material in the 1960s.

Lin, who is best known as the director of several installments of the “Fast & Furious” franchise, commented last year that he has “always admired Bruce Lee for his trailblazing efforts opening doors for Asians in entertainment and beyond.” 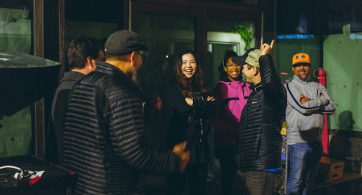 As told to Serena Kim After receiving her graduate degree from USC, Nina Yang Bongiovi headed to Shanghai to work as a director’s assistant in martial arts action films. […]