Actor Telly Leung is set to take on the title role in Broadway’s production of “Aladdin,” which will begin June 13. Leung succeeds Adam Jacobs, who left earlier this year to lead the show’s North American tour.

“The movie was a big part of my childhood, and it has a very special place in my heart … and getting to play a Disney prince is my childhood dream come true!” Leung told NBC.

Leung has taken on numerous other roles in Broadway shows, including “In Transit,” “Allegiance,” and “Godspell.” The time around, he’ll be joining a cast of 36 that features Courtney Reed as Jasmine, Major Attaway as Genie, and nominee Jonathan Freeman as Jafar.

“As a kid, I have such a vivid memory of my first Broadway show (which was ‘CATS’) and it warms my heart and gives me great satisfaction to know that I will be part of that next generation’s Broadway scrapbook,” Leung told NBC. 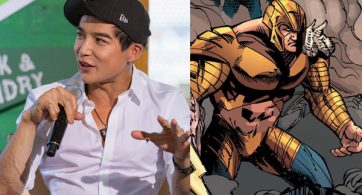 The latest news coming out of “Aquaman,” the DC superhero pic directed by James Wan and starring Jason Momoa, is Ludi Lin, the Chinese Canadian actor who’s been cast as […]