Harley Quinn is back, and this time, she’s brought some girlfriends along for the ride.

The first full trailer for the eagerly anticipated “Birds of Prey: And the Fantabulous Emancipation of One Harley Quinn” shows Gotham’s colorful leading ladies kicking @ss, taking names and… having a sleepover? The film follows Harley Quinn (Margot Robbie), Black Canary (Jurnee Smollett-Bell), Huntress (Mary Elizabeth Winstead) and Renee Montoya (Rosie Perez) as they try to protect Cassandra Cain (Ella Jay Basco) from an evil crime lord. The film also features everyone’s favorite stand-up star, Ali Wong, in an as yet unnamed role. Basco will be making her feature debut, and with Cathy Yan (“Dead Pigs”) helming the project, “Birds of Prey” is also the first ever superhero and DC movie with an Asian American female director. Better late than never, right? 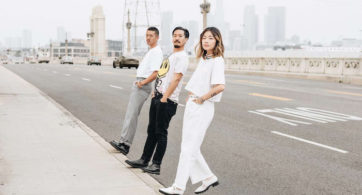 With a month to go until their next EP release, Run River North offer a second peek of what’s ahead—this time, with an accompanying trippy lyric video. “OKAY COOL,” […]