More than a decade into his Major League career, Chan Ho Park still needs to pause for the occasional moment of clarity. Like a rookie being called up for his first start, or a veteran grinding out his final season, Park admits that every year provides a new note—a new big league moment that even he must view from a third person perspective.

“I don’t think I can count how many,” says the 36-year-old pitcher, clad in a hooded Monarchy sweatshirt and jeans at his home in Marina del Rey, Calif. “Going to the World Series last season; that [experience] is totally different than having 18 wins in a season. Pitching in the World Series…it was extreme and it was fun. Pressure is always fun.”

Park, who in 2009 began his first season with the defending National League Champion, the Philadelphia Phillies, was featured as a relief pitcher, demonstrating the consistency and adjustments that have defined the successful portions of his career—mixing his two-seam fastball, slider and changeup to get ahead of batters, limiting walks and homeruns.

Once he found a comfort zone in the bullpen, Park came into his own. Following the All-Star Break, he became one of the Phillies’ most reliable relievers, posting a 1.85 ERA (earned run average), though a strained right hamstring sustained in mid-September rendered him unavailable until Game 1 of the National League Championship Series (NLCS) against the Los Angeles Dodgers.

Following a rehab stint, the Phillies hurler, sporting perhaps one of the finer beards seen in recent playoff memory, became one of manager Charlie Manuel’s late inning solutions. With four appearances in the NLCS, and another four in the World Series, Park became just the second Korean player to reach the Fall Classic, following Byung-Hyun Kim of the 2001 Arizona Diamondbacks.

Though Park was ill during the Series—infected with swine flu, no less—he was able to maintain his focus while pitching on baseball’s grandest stage. His opponents: the greatest postseason performers in the sport’s history, the New York Yankees.

“I had the swine flu during the World Series, [but] it didn’t matter,” Park recalls. “Sometimes, when you’re not feeling good, mentally you get stronger and you’re able to focus.”

Park used that focus to bounce back during Games 4 to 6, adding to his bulldog mentality and displaying the L-O-V-E he’s generated from his fans and supporters.

He spoke of that “love” immediately following his team’s NLCS victory in October—which secured the Phillies’ spot in the 2009 World Series.

“You know the word L-O-V-E? Love?” said Park to The Philadelphia Inquirer. “I feel that for the people back home in Korea, who have always supported me, and for the fans in Philadelphia, who have treated me so well. I am so happy that I did not give up two years ago, that now I have a chance to be a champion.”

While the Phillies ultimately lost the World Series title to the Yankees, Park’s 2009 playoff performance highlights how far he has come.

Introduced to baseball as a 10-year-old in Kongju City, South Korea, Park would come to embody the nation’s burgeoning enthusiasm towards the sport. Young and in a country where the newly established Korean Baseball Organization provided the only professional outlet, Park played in Kongju City, where the small town mentality contributed to his exposure, eventually elevating him as an amateur and member of the Korean International team.

Park’s career as a Major League Baseball player began amidst a historical backdrop.  Appearing in his debut for one inning on April 8, 1994 at Dodger Stadium, the then 21-year-old right-hander wasn’t even the game’s headline, as Atlanta Braves pitcher Kent Merker opposed the Dodgers with a no-hitter. It wasn’t until 1997 that Park would start making a name for himself. Used almost exclusively as a starting pitcher, he would win 14 games with a 3.38 ERA, the second lowest of his career.

As a member of the gold medal winning team at the 1998 Asian Games, Park’s career stood at the same crossroads that fellow South Korean Major Leaguer Shin-Soo Choo is currently facing. An outfielder for the Cleveland Indians, Choo may be called upon to serve his mandatory two-year military obligation under South Korean law (though a waiver would not be the first for a successful Korean athlete). Following the 1999 season, Park reported to boot camp for one month of training, but received a waiver, allowing him to focus purely on baseball.

“He’s one of the treasures of the country,” Park says about Choo, his South Korean contemporary. “The opportunity to play in the Major Leagues is better than sending him to the Army right now. I don’t know how much he can help the country being in the Army. Playing baseball is helping the country. He is the most valuable [Korean] player in the [Major] League, and if he can’t play, that’s bad for the country.”

With his military obligations waived and the transition from Korean to American culture at ease, Park began to heighten his role as a pitcher in the Major Leagues. Early success with the Los Angeles Dodgers and support from a strong Korean American fan base turned him into a household name, though Park suffered his first career lapse after signing a new five-year/$65 million contract with the Texas Rangers after the 2001 season. Texas would test Park’s mettle and resiliency, as his three-and-a-half seasons there were criticized as one of the poorest free agent signings of the 2000s.

After a trade sent him to the San Diego Padres, Park’s struggles continued. His years as a Ranger behind him, Park attempted a career revival, though a bout with intestinal bleeding would hinder the process. Placed on the disabled list and unable to pitch, many of Park’s San Diego teammates offered to donate blood to the pitcher who would eventually be hospitalized for blood transfusions and surgery.

“That was great,” Park says of the support he received from his teammates. “I felt really appreciative. That’s how the team was in San Diego. Guys felt like family, brothers, teammates, very good friends.”

Following the Padres, Park signed with the New York Mets, and after two minor league stints, found his way back to his original team, the Los Angeles Dodgers, for the 2008 season. In his May 17th start, Park reminded fans of the path he helped blaze, as the Dodger’s pitching credentials consisted of Park, Taiwan’s Hong-Chih Kuo and Japan’s Takashi Saito, the first time in MLB history that three pitchers born in three different Asian countries pitched for the same team, in the same game.

For the past two seasons, with the Dodgers then the Phillies, Park has been used primarily as a relief pitcher. Playing in his best seasons since 2001, he has enjoyed personal and team success, and has embraced a new chapter in his life as a family man.

“It’s a lot of work at home,” Park says of his life off the mound. “Especially in the off-season, you got to help the wife because she has a hard job during the season.”

Park, who is not a U.S. citizen, and has no immediate plans on becoming one, must also travel from his Southern California residence back to Korea every off-season to retain his work visa for the following year. Though he believes an American education for his two girls, Elynne, 3, and Selynne, 1, is an important part of their futures, Park would like to further his work as a baseball ambassador, supporting the advancement of little league programs in South Korea. The founder of a nonprofit organization, the Beverly Hills-based Chan Ho Park Dream Foundation, Park has also been steadfastly dedicated to assisting South Korean students achieve their educational goals through a scholarship foundation.

Yet for now, Park is forced to ponder the remaining years of his baseball career.

A current free agent still in search of his new home for the 2010 season, he admits that he is comfortable in Philadelphia and happy to be in a town so passionate about baseball.

As of late December, Park still remained unsigned by a Major League Baseball team. While he has established a comfort zone in Philadelphia, rumors persist that his days as a Phillie may be over. Regardless of his ongoing contractual talks, with his strong performance throughout 2009, Park has positioned himself to become a solid contributor to any contending ballclub.

“Probably in the Major Leagues,” says a laidback Park, smiling, when asked where he would like to pitch next season. “I’m focusing on next year…just one at a time now.” 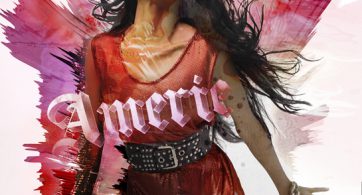 Def Jam songstress Amerie debuted her third video, ‘More Than Love,’ from her latest album, In Love & War, on Christmas Eve. With help from longtime friend and emcee, The Loso, Fabolous, the song delves into the issues of trust when in a relationship. Already the single has been making its rounds on the Web and with less than a week after it premiered, the video has already almost had 5 million views.