COVID-19 has struck a chord with The Filharmonic, a Filipino American a cappella group, in the midst of their eagerly anticipated A Cappella Live! tour.

The Filharmonic rose to popularity after their run on NBC’s “The Sing-Off“ in 2013 and an appearance in 2015’s “Pitch Perfect 2,” and the singers have become a viral sensation after their appearance on James Corden’s “The Late Late Show.”

The five-member vocal group was set to perform 34 shows between February 3 and April 4. But on March 12, The Filharmonic received notice that the remaining three weeks would be canceled, with the last performance being March 13 in Keene, New Hampshire. “This tour had been in the works since 2018, so to see it cut short like that was kind of hard to swallow,” says Trace Gaynor, a tenor and the group’s social media manager.

Shows outside of A Capella Live! scheduled for April and beyond have also been postponed. The timing of the outbreak also interferes with concerts that the Filharmonic would normally be booking now for the fall.

This upheaval due to COVID-19 is still being experienced by the live music community at large, with many questions currently left unanswered. Although the circumstances may be difficult, Gaynor believes that this time period will ultimately bring the community together. “The only solace I take from all this is that no musician or band has the right answer to moving forward,” Gaynor says. “Everyone is working to find what the next steps are, and it wipes the slate clean for someone to pave the way and figure out how to fill the need for live music in times like these.” 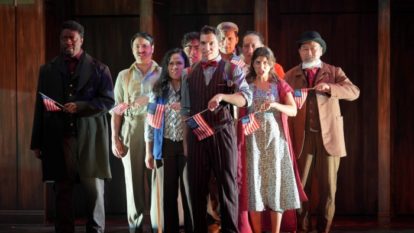 The curtain has officially been dropped on Los Angeles’ theater productions. This includes the Geffen Playhouse’s run of “Man of God“ and plays put on by the historic Asian […]