In the first episode of the Apple TV+ series “Pachinko,” confident businessman Solomon Baek (Jin Ha) takes his first steps into his childhood home in Osaka, Japan after years away in the United States. But he finds his grandmother Sunja (Youn Yuh-jung) fussing over him moments later, telling him he’s too skinny, and making her way into the kitchen to fry up some pajeon while Solomon watches.

Watching this scene, I was struck with a wave of nostalgia—which I found a bit odd, seeing as one, I am not a Korean grandma, and two, I am also not an up-and-coming businessman in the 1980s. But nonetheless, the interaction transported me back to my own childhood. The sequence felt pleasantly similar to my experiences with my own grandmother. Be it early weekday mornings, which she spends blending some god-awful green juice for my ông ngoại to drink before work, or family dinners, where she skillfully scoops portions of bún riêu into bowls as the rest of the family watches in anticipation. When we saw the first cases of COVID-19 and the world felt increasingly chaotic, she carefully rolled eggrolls for each of her children and grandchildren. The language barrier between us isn’t easy to ignore, but even if my bà ngoại and I can’t have long conversations, I’ve never doubted her love, shown through those meals and snacks.

Western-dominated mainstream media frequently presents a stereotype of Asian parents and even grandparents as being cold and controlling. Think of the endless essays about tiger parenting in the decade following Amy Chua‘s publication of “Battle Hymn of the Tiger Mother,” or how on-screen Asian characters—like Lane from “Gilmore Girls,” and even Mike Chang from “Glee”—were accompanied by overbearing parents who believed that love only came through earning all As and an acceptance letter to an Ivy League college. But this stereotype fails to take into account how many Asians shy away from saying “I love you” and instead rely on acts of service to share their feelings rather than the more common love languages in Western society.

Kelly H. Chong, professor and chairperson of sociology at the University of Kansas, says that so-called “tiger-parenting” is actually a form of love toward children rather than being as cold as the media has portrayed. “Asian parents and Asian mothers especially have this tiger mom stereotype, which is unfair,” says Chong. “Because of all these ways that they show their love, not necessarily by saying it but by asking you to be successful in school and pushing you, that’s also a form of love. It’s a way of protecting you against racism and a way for them to enable you to survive in what they view as a hostile society.”

While many outside of the pan-Asian community may think that Asian parents withhold affection by pushing their children toward success, that couldn’t be further from the truth. As so many Asian cultures value acts of service, leading their children towards a better life through academic achievement can be seen like an act of love, in a similar vein as something more universal like cooking food or cutting fruit—for example, how my grandmother packs oranges and other fruits for me and my sisters whenever we come to visit, or how Sunja automatically begins to cook for Solomon when he returns home.

In “Pachinko,” Sunja and other characters may not often utter words of affection to one another, but instead, the series uses food as a medium for showing love. When Sunja is a young woman, leaving her fishing village of Yeongdo for Osaka, her mother Yangjin (Inji Jeong) can’t afford to shower her with jewels, nor does she offer any empty, kind words. Instead, Yangjin offers Sunja white rice during their last meal together. During Japan’s colonization of Korea, white rice became a luxury, something a poor widower like Yangjin could rarely splurge on. But by providing this for her daughter’s final meal at home, Yangjin can show her love for Sunja one last time.

While AAPI viewers will understand the meaning of something as seemingly small as a bowl of rice, Chong believes this aspect of Asian culture may be hard to understand from a Western perspective, which values more up-front forms of affection from loved ones. “I don’t think that’s something particular to only immigrant parents and the second generation, because that’s how things are back in the home country,” Chong says. “I spent the first 10 years of my life in Korea, and it’s the same thing. They’re bringing over the ways of caring to this country. They never say I love you verbally; they believe you will know that they love you because of what they do for you.”

Western media might have people believe that our homes are occupied by overbearing, emotionless tiger parents who only care about honor and success. But in reality, the way many AAPI households show love is simply more subdued than in other cultures. Instead of declarations of love or hugs, just like my bà ngoại we carefully peel the skin off of pears and apples and place them into containers; we make sure there are extra pieces of fish left for our younger cousins; we pack endless amounts of sticky rice and spring rolls to ensure our loved ones are well-fed no matter how far away they might be. Sunja and her family members go through an endless amount of struggles together and must constantly sacrifice in the name of a better future, but throughout it all, they continue to show love to one another in simple, familiar ways. Sometimes, you don’t need to hear a loud proclamation of affection—a home-cooked meal can be more than enough. 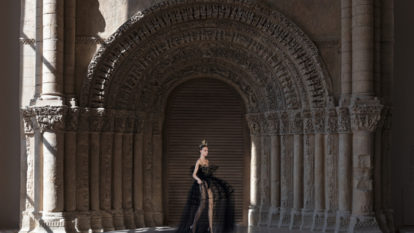 The San Francisco art museum will open the exhibition to the public this month, with it concluding in September 2022.