Christina Chang draws inspiration from a number of sources: books, movies, people-watching, conversations. But what now drives Chang’s actions the most is to be an inspiration to her young daughter. “It’s so important for [her] to see what it looks like to work hard for something,” Chang said, who plays Dr. Audrey Lim on ABC’s “The Good Doctor.”

Chang has definitely demonstrated a knack for being bold. She originally dreamed of becoming a professional ballerina, but stopped due to physical reasons. She picked up acting, but with no pretense to do it professionally. But during her junior year of college, she insisted on free falling it. “I didn’t have a secondary back-up plan or anything,” Chang said. “I thought that if I’m gonna go for it, I just have to go for it. Leap and the net will appear.”

She’s landed plenty of roles with this “leap without lifelines” dedication. Chang’s first big gig was as a recurring character on the Dick Wolf-created 2000 television series “Deadline.” “My naivete served me well,” Chang said of her role as graduate journalism student Beth Khambu. “I was able to be present and open to the character, and I had almost no expectation of the outcome. When we remove pressure, we free ourselves to access our best selves.”

For “The Good Doctor,” her portrayal of snarky trauma surgeon Dr. Lim injects levity into the hit drama that premiered in 2017. “It’s important to have a sense of humor sometimes so that [the show] doesn’t feel so heavy,” Chang said.

It’s also resulted in Chang being bumped up from recurring to the regular cast for the recently launched Season 2, a fact that she feels speaks to the changing landscape of television roles for women. “It feels really good and important right now to be the gender that I am, the ethnicity that I am,” she said. Still, Chang noted that it has taken a very long time for TV to start respectfully representing people of color.

“If you turn on network television, or watch any streaming hit show, you can count on one hand how many Asian females are the leads,” she said. “We’re all leading characters in our own lives, so why shouldn’t more of the faces we see every night in our living rooms represent that?” For Chang, it’s especially important for her daughter and younger generations to see themselves represented on-screen.

Years of TV invisibility made her feel like she didn’t have a voice. During her early days, Chang felt that she often compromised herself to please people. Given the chance to go back and give her younger self some advice, Chang would tell herself to listen more carefully to her own thoughts and feelings. “I’m so much more confident in myself now,” she said. “But I still work on encouraging kindness to myself, to take larger risks, and to ultimately trust that I’ve got this.”

This article appears in the October 2018 issue of KORE Magazine. Subscribe here. 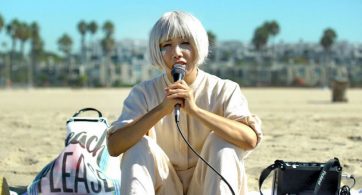 Vivian Bang’s “White Rabbit,” a comedy detailing the struggles of a Korean American performance artist trying to make it in Los Angeles, will run on screens at the Laemmle […]