Pictured above: Aubrey holds up an Emmys statue with the executive producer of Modern Family, Jeff Morton.

The holiday season just ended, which means one thing in Hollywood: awards season! I never would have guessed that I would be attending major awards shows like the Emmys, the SAG Awards and the Golden Globes as the date of a small child, but Aubrey has been attending these events since she was four, making this our fourth awards season together.

Over the past few years, we’ve developed some strategies to help us get through the long, hectic night. Here’s a basic rundown of an awards show day for us.

Early in the morning, around 7 a.m., Aubrey and I wake up and go about our day as usual. We shower, have a hearty breakfast, feed the pets and walk the dogs. If Aubrey weren’t a little kid, we would have slept in, but any parent knows that kids still wake up early even if it’s OK for them sleep in that particular day.

Around midmorning, the parade of people begins. Photographers, agents, film crews, and a hired hair/makeup artist arrive at our house to help us prep or capture these moments. It’s usually during this time when wacky things happen, such as our dresses not fitting over our heads and needing to be taken apart and sewn on, or our hired hair/makeup artist arriving 45 minutes after getting lost because she’s really, really high.

We also wait until the last minute to put on our dresses because 1) they’re uncomfortable and 2) a child will ruin her dress before she hits the carpet. Last year at the Golden Globes, Aubrey had chocolate on her pastel pink, custom Tea Collection dress before the ceremony even began.

Amy and Aubrey in the town car, heading to the Emmys

Sometime between 1:30-2:30 p.m., a lovely black town car comes to pick us up. This is the only moment of quiet we get all day, so Aubrey and I use this time to decompress. I purposely bring a giant purse big enough to hold snacks, wallet, phone, house keys, charger and an iPad – all necessities of taking a kiddo to an awards show! No cute little clutch for this mama. I’ve got a mom purse on the red carpet, and I don’t care.

We arrive and the red carpet is a mad house. We always try to get there early because more people tend to show up late. The bigger the name, the later they arrive. If we wait too long, Aubrey will get squashed like a bug. You wouldn’t believe how crowded it gets and how long the carpet is. Some of the rudest people I’ve ever encountered in my life have been on the red carpet—not the actors, but their “people” who won’t hesitate to shove a little girl to get their client in the right place at the right time. This is the kind of drama we don’t need.

We zip through the interviews and photos on the red carpet as fast as possible, and then we wait for the show to begin. It’s late afternoon by this time, and all of the people who made fun of my big mom purse are now asking me for snacks. We share. We’re nice.

Aubrey on the red carpet at the 2014 Emmys

Aubrey is always such a good girl at these shows, and the iPad keeps her entertained during the commercial breaks (big purse FTW). Just for the record, Aubrey’s favorite awards show is the SAG Awards because she gets her own statue if her show wins. At the Emmys and Globes, only the show creators and producers get statues, which seems silly to me. I think everyone from the actors, accountants, set painters to the animal trainers should have their own statues since they make the show what it is. But, I digress. Aubrey loves her three SAG Awards statues. She even named her first one “Prince,” made him outfits and introduced him to Cinderella.

At some point during the ceremony, Aubrey either goes onstage for her win or she doesn’t. Modern Family has been sweeping awards left and right since Aubrey joined the cast back in 2011. She has taken the losses well which makes me happy, but what makes me even happier is watching her root for her colleagues who are nominated for individual categories. She crosses her fingers and woo-woos loud and proud when a co-worker wins an award. Aubrey is really proud of her show.

When her show wins, I zip backstage with the other Modern Moms, and we frantically race to find our children. Once we catch up, it’s a dizzying PR bonanza that takes us from press room to press room. This is all going on backstage while the rest of the ceremony continues.

After a zillion photographs and interviews, we get ushered back to our seats to finish out the show, and then the after parties start. At this point, we’re really hungry, my feet are meat and it’s past Aubrey’s bed time. Despite all of that, our adrenaline keeps us going and we head into the party to find something to eat. Mommy gets a cocktail while Aubrey, a Shirley Temple with extra cherries.

Aubrey usually makes it until about 11 p.m. but the parties go well into the night for her co-stars. By this point, we’ve been up for 16 hours straight, which is fairly insane for someone who wears My Little Pony underwear. We hobble to the valet and call it a night. What a night.

We really are the luckiest girls alive, and we know this winning streak is winding down. No show can win forever, but Modern Family has done pretty well for itself in the awards department, and we are honored to be along for the amazing ride.

After a long car ride home, we still have to shower. I have loads of makeup on my face, and Aubrey and I have about a gallon of hairspray and 5000 bobby pins on our heads between the two of us. Once we’re finally cozy in bed, I reflect on another surreal day in La-La Land while Aubrey drifts off to sleep, dreaming of cherry-laden sodas and her Prince.

Amy Anderson is a Korean American adoptee, comedian and actress. She created and hosted the first Asian American standup showcase “ChopSchtick Comedy” at the Hollywood Improv. She has appeared on Comedy Central, VH1, AZN, and the Game Show Network. Her daughter Aubrey Anderson-Emmons plays the role of Lily on the Emmy-winning show Modern Family.

The Hollywood Mamalogues will be published online biweekly. Read the previous Mamalogue here. 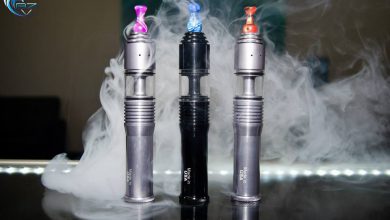 A few years ago, I began hearing about vapes, or electronic cigarettes, and I saw my peers start to use them with the claim that they wanted to quit […]