Pictured above: Hudson Yang, who portrays Eddie Huang in Fresh Off the Boat with Aubrey Anderson-Emmons. (Photo courtesy of Amy Anderson)

Born in Seoul, I was adopted and raised by a Caucasian family in suburban Minnesota during the ’70s and ’80s. My daughter is a hapa growing up in present-day Los Angeles. Needless to say, my daughter and I have very different Asian American experiences. One significant difference is that growing up, I rarely saw Asian faces featured in media or entertainment, aside from Connie Chung, Mr. Miyagi and Long Duck Dong.

When I was around Aubrey’s age, the musical Annie was a huge Broadway hit, and every little girl in America wanted to don that red dress, myself included. I was cute, the right age and I was a terrific singer. I was convinced that all I needed was a wig to audition for the role. Boy, was I wrong. I also had a rude awakening when I realized I would probably never get to play one of the Von Trapp children or Jane from Mary Poppins.

Still, I became a comedian and actor. While I’m proud to say that my generation and the one before it planted seeds and opened several doors for Asian Americans in the entertainment industry, I believe it’s Aubrey’s generation that is actually changing the perception of what it is to be an American.

To this day, I still cringe a little whenever someone asks me about my nationality by bringing up the notorious question, “Where are you from?” People ask me this question a lot, and I never know what they really mean when they ask it.

My country is the United States of America. I’m an American—to be more specific, a naturalized American citizen. My ethnic origin is Korean, but South Korea is hardly my nation or my culture. While I’m proud of my Korean heritage, I’m also proud to be a U.S. citizen, even though I’m often seen as a foreigner in a country where I have lived for almost my entire life. As for “where I’m from,” I currently live in the San Fernando Valley. However, that’s usually not the answer people expect or want to hear.

So, I think it’s pretty astounding that my daughter plays an Asian adoptee daughter of a gay couple on an award-winning TV show. Up until last week, Aubrey was one of the few Asian American child actors who act as series regulars on a primetime TV show. Albert Tsai and Lance Lim had brief stints on the short-lived shows Trophy Wife and Growing Up Fisher, but other than that, there hasn’t been many little Asian faces on TV. That is, until now.

Aubrey with Hudson Yang of Fresh Off the Boat. (Photo courtesy of Amy Anderson)

Earlier this month, ABC unveiled Fresh Off The Boat, the latest in its lineup of ethnically diverse family comedies. This sitcom not only stars three young Asian American boys (one of them being Aubrey’s good friend, Hudson Yang), but also their immigrant parents!

With that said, Fresh Off the Boat is a game changer. It’s the first Asian American family show on primetime television since Margaret Cho’s All American Girl aired 20 years ago. Many Asian Americans of my generation never thought they would see developed, multidimensional Asian American characters have their own TV show in their lifetime. Thankfully, most of the reviews for Fresh Off the Boat have been positive, and there has been some great dialogue about race and culture within the AAPI community. It’s exciting to see how much the show is gaining traction.

What moves me even more, though, is knowing what this game changer could mean for my daughter. Maybe in the near future, when Aubrey sees a casting breakdown that says “girl next door” or “All-American girl,” she won’t have to assume that the casting directors mean “Caucasian.” Maybe from now on, when she sees faces on TV that look like hers, she’ll feel proud and happy instead of feeling embarrassed or confused. Hopefully she’ll get called “chink” a lot less than I did. And maybe one day, when people ask Aubrey where’s she’s from, she can confidently say “Los Angeles,” knowing that that’s exactly what they meant.

Amy Anderson is a Korean American adoptee, comedian and actress. She created and hosted the first Asian American standup showcase “ChopSchtick Comedy” at the Hollywood Improv. She has appeared on Comedy Central, VH1, AZN, and the Game Show Network. Her daughter Aubrey Anderson-Emmons plays the role of Lily on the Emmy-winning show Modern Family. 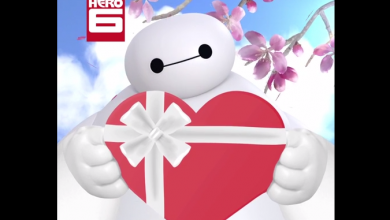 We already have countless reasons to love Baymax (voiced by Scott Adsit), but the huggable robot from Disney’s Big Hero 6 recently gave us yet another reason to love […]