Editor’s note: We’ll be bringing you the latest scoop of what’s happening in Asian American film, TV, literature and music in our monthly “Lookout” articles. We’re doing the legwork, so you don’t have to.

It was a great moment in Hollywood history, but there’s so much more to Asian American cinema than just one rom-com. In fact, there’s a whole bunch of stuff going on every month. This July, you can listen to Yuna’s latest album, soak up the sun with a new book, watch the end of “Orange Is the New Black” or catch Awkwafina’s latest performance in “The Farewell.” It’s summer, so it’s prime time get out there and spend some free time reading books, binge watching TV and support Asian American representation at the movies.

Here’s all of the people in the Asian Pacific Islander community doing some “crazy cool” stuff this month:

The latest movie to come out of the Marvel Cinematic Universe follows the young web-slinger in his blunder, wonder high school years as he tries to woo MJ (Zendaya) while fighting off some interdimensional baddies. The young Peter Parker is played by Tom Holland, while Remy Hii (“Marco Polo”) appears as his romantic rival, Brad Davis. Jacob Batalon also makes an appearance as Spidey’s best bud, Ned Leeds.

What if you had to lie to your grandmother about her cancer diagnosis? That’s exactly the question that “The Farewell” tries to answer. Although this film premiered at Sundance at the beginning of this year, it’s hitting theaters this month. Directed by Lulu Wang, Awkwafina makes  her dramatic debut as Billi, a young, Chinese American aspiring writer. “The Farewell” is a hilarious and heart-breaking examination of family and what it means to be Chinese.

A modern reimagining of the classic buddy cop film, “Stuber” follows Stu (Kumail Nanjiani), an unsuspecting Uber driver who gets roped into a wild night out with Vic (Dave Bautista), a hard-nosed detective. Vic is determined to stay on Teijo’s (a bloodthirsty terrorist played by martial arts aficionado Iko Uwais) trail while Stu struggles to maintain his high Uber rating.

Ah… Another coming of age story, just in time for summer. Not that we’re expecting this to be as heartbreaking or as grand in scope as “Call Me By Your Name,” but this looks like it’ll be a fun rom-com. Oh, and Hayden Szeto AND Lana Condor are in it. Nice.

The ninth feature to come from legendary director Quentin Tarantino takes a look at old Hollywood in the swinging year of 1969. In addition to cinema giants like Leonardo DiCaprio and Brad Pitt, “Once Upon a Time” also features fifth degree taekwondo black belt, Mike Moh, who will be playing the late, great Bruce Lee.

The hit Netflix show is returning for its fourth time around the block on July 19. Who else can’t wait to see what kind of makeovers the “Fab Five” will dream up this season?

When the first season of “Orange Is the New Black” made its premiere in July 2013, the internet was ablaze with buzz about the show’s majority female cast and actors of color, including Kimiko Glenn and Lori Tan Chinn. Soon you can catch the final installment of Piper’s epic misadventures.

After a three year hiatus, Malayasian singer-songwriter Yuna is back with her fourth album, “Rouge.” The album promises to be exploration into “love, spirit and strength.” Two songs, “Black Marquee” and “Pink Youth,” have already been released from the album (paired with some epic music videos) and we’re dying to listen to the rest.

Penned by a former journalist, “The Twelve” is an epic saga that follows a young girl named Usagi as she travels to Mount Jade after her sister Uma is captured by the nefarious Dragonguard. Based on the legend of the Chinese zodiac, this young adult novel is the first in a sure-to-be exciting series.

Do you like psychological thrillers with a romantic twist? Well, then pick up this novel before you head poolside. In this tale of best-friendship gone horribly wrong, protagonist Remy Tsai’s boyfriend is shot in cold blood by her friend, Elise. Did she do it in self-defense? Or is something more sinister afoot?

This young adult fantasy novel is billed as “Project Runway” meets “Mulan.” Young Maia Tamarin dreams of becoming the best tailor in the land, but because she’s a girl, the only thing that she has to look forward to in her future is marriage. So, she disguises herself as a boy and takes her father’s place when he’s called to court to serve the royal family. There she encounters cutthroat competition, backstabbing and a bunch of pricks. From the needles, of course.

If you’re looking for something a bit more substantial, this is it. Koe weaves together an epic tale from the lives of three 20th-century, female pioneers: Marlene Dietrich, Anna May Wong and Leni Riefenstahl. It’s an intimate and raw exploration of womanhood through the eyes of three legendary actresses.

A young girl, Sab, sees a black butterfly right before her 11th birthday. The catch? According to Filipino superstition, that means she only has a week to live. “My Fate According to the Butterfly” explores what it’s like to come of age in Manila as a young woman, and is blogger Villanueva’s debut novel. 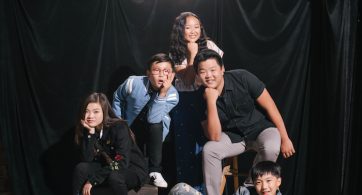 At Character’s offices in Gardena, California, Miya Cech and Ella Jay Basco sit in front of a vanity mirror, giggling and perusing makeup choices like they’re getting ready for a […]