There is nothing in life quite like family. Your parents are the source of your being, and it is family members who can offer support and comfort, unconditionally. But those same people can also cause stress and frustration to the point where you wish you were dead. And no matter how much they piss you off or cause you grief – like the umpteenth time they nag you about being single into your late 30s – there’s no escape from them, because they will always be family.

For the Hernandezes of Honolulu, there is something else that binds them: music. And there’s one fortunate son who’s made quite a name for himself doing just that: Peter Hernandez, better known as Bruno Mars. But now his four sisters – Jaime, Tiara, Tahiti and Presley – want to demonstrate just how deeply the musical talent runs in their brood. Together, they’re The Lylas, and their journey to hopefully becoming the next pop stars in the family is documented in a new non-scripted series that premiered on WEtv in early November, simply titled The Lylas.

Now, before you start to roll your eyes about another gaggle of girls from the same family having their lives captured on camera, this quartet of women had some of the same thoughts. “Before we signed up to do a reality show, we weren’t 100 percent behind it. There’s a stigma with reality shows,” says eldest sister Jaime. “Are people going to laugh at us? Is it going to flop? Is it going to do well? Are we going to take it seriously?”

Watching the first episode, you’ll recognize some of the tropes that characterize these types of shows. First off, the four daughters of Peter Hernandez, Sr., and Bernadette Bayot certainly all have the prerequisite telegenic looks. And there is plenty of bickering to go along with the alcohol consumption.

But tragedy would befall that would change their outlook on the reality show experience: their mother, also known as Bernie, died this past June of a brain aneurysm in the midst of taping. “We’re so grateful to have documented our last few special moments with our mother,” says Jaime, “that all of [the concerns of doing a reality show] are out the window.”

The series premieres with the sisters coping with their loss, and then flashes back in time as they prepare to move from Hawaii to Los Angeles to pursue their musical dreams, with their mother’s support. There are some chilling moments as you hear Bernie say, “I’m just a baby star-maker,” as well as her making references to life and death.

As a child, Bernie and her family emigrated from the Philippines to Hawaii in 1968. She, along with some of her siblings, grew up to be a performer, including a hula dancer, as part of Honolulu’s many shows. That is where she met Peter Hernandez, who is of Puerto Rican and Eastern European Jewish descent, who is also an entertainer.

“When [our father] met our mom, he taught her how to sing. My dad cannot sing at all,” says Jaime. “But he’s an amazing producer. He can arrange harmonies beautifully.”

One of the projects in Honolulu Peter started was a revue called the Love Notes. “My mom ran the girl group, and he ran the guy group,” says Jaime. “Shows [and our parents’ rehearsals] were a part of our lives. For us, that was like going to soccer practice.”

“Have you seen The Sound Of Music?,” Tahiti chimes in, the second youngest sister and a mother of two boys. “That’s what our family was like, minus the whole Nazi thing. [The Von Trapp family is] what we aspired to be.”

Talking to all four sisters at once over a conference call is a daunting experience. They have fun at this writer’s expense when asked for their ages (in their 20s and 30s is all they would reveal; Presley’s the youngest). They certainly gab like sisters, interrupting one another and finishing sentences. And soon enough, the barbs are flying as they all poke fun of each other, even while they reminisce about their mother.

Jaime’s good-natured response: “Everyone, shut up!”

With music such a huge factor in their lives, perhaps it was inevitable that the sisters would form their own girl group (the sixth sibling, Eric, is the drummer in Bruno’s band). The Lylas, which stands for “love you like a sister,” came about when a nonprofit charity organization that Jaime founded, called 4 Mama Earth, was going to put out a benefit record to raise money for an orphanage in the Philippines. The sisters wrote a song called “Headed Home.”

“It’s all about going back to your roots and never forgetting where you came from,” says Jamie. “It was going to be a ‘We Are The World’ type of song, and we had a bunch of [Filipino American] artists on the song. And I called the girls and was like, ‘We need to do this together. Let’s just do a little bridge or a hook on the song.’ So we did, and it was just magic in the studio. And then we were like, ‘let’s work on another song,’ and so we started writing together and recording and it just sort of happened like that.”

They’ve released one single thus far, “Come Back,” a song about realizing you’ve dumped the wrong man. While it may not speak directly to Jaime, a married mother of two, she says, “but as sisters, when one person goes through something, we all kind of go through it together. It might not apply to all of us at the same time, but it applies to us at some point in our lives. When you date one of us, you date all of us.”

“It’s a blessing and a curse,” adds Tahiti.

Being related to Bruno Mars, too, has both positives and negatives. “It’s difficult because a lot of people think, ‘Bruno’s their brother, so it’s just going to be so easy for them,'” says Presley. “Actually, it makes things a lot harder because we have a lot more barriers to break. We have to get out of being ‘Bruno’s sisters.'”

“It’s been helpful in that it’s gotten us in the door,” says Tahiti, “but it doesn’t take us anywhere, really. We’ve got to do that ourselves.”

They are already making an impression on people, especially through social media. It was their fans who started urging them via Twitter to do a television series. “I think they’ve seen the chemistry that me and my sisters have together,” says Tahiti. “And everyone after that petitioned, ‘please have a reality show; open the doors and let us into your guys’ world.'”

Of course, mixing family and business can be a volatile combination. When asked if they like working together as sisters, Tahiti jokes, “I got to go, my phone’s cutting out.”

But, ultimately, just like family, being in a group together “has its ups and downs,” says Jaime. “But if we weren’t sisters, I could see why girl groups break up. It’s not easy. Just because we’re sisters doesn’t mean egos aren’t involved. We do fight. But at the end of the day, we’re still sisters, and we have to get over it. It makes us closer.” 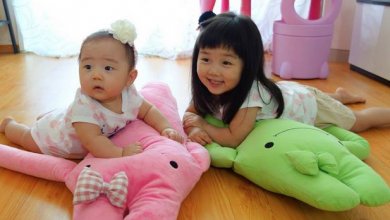 There is no denying that cute Asian babies have become viral sensations. While some popular fads are questionable, we completely understand why adorable babies are irresistible to squeal over. […]