Who watched the Grammy Awards this weekend? Notice anything besides Lady Gaga and her egg?

The Parker Quartet, a classical string quartet consisting of Daniel Chong (violin), Karen Kim (violin), Jessica Bodner (viola) and Kee-hyun Kim (cello), won a Grammy Award for best chamber music performance – something you may have missed, since the win was announced pre-telecast.

Still, the win is no less momentous for the relatively unknown quartet.

“I think I screamed when it happened, we were so excited,” Kim told the La Crosse Tribune. “We were hoping for something great to happen but didn’t expect it. Hopefully, this will propel us a little bit.”

All four musicians met while studying performance and chamber music from the New England Conservatory of Music and were part of the NEC’s Professional String Quartet Training Program. The quartet began its professional career in 2002, and quickly racked up accolades and prizes.
It won the Grand Prix and Mozart Prize at the 2005 Bordeaux International String Quartet Competition, won the 2005 Concert Artists Guild Competition, the 2009-11 Cleveland Quartet award and of course, picked up a 2011 Grammy this past weekend for its recording of George Ligiti’s first and second string quartets.

The group also devotes a major portion of each year to working with young musicians; it participates in Saint Paul Chamber Orchestra’s CONNECT program and served as the Ernst Stiefel String Quartet-in-Residence at the Caramoor Center and the ensemble-in-residence at the Yellow Barn Music School and Festival.

Learn more about the Parker Quartet at its website, http://www.parkerquartet.com. 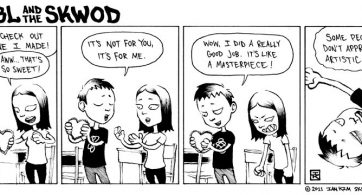