While walking the red carpet at the 19th annual Unforgettable Gala, API celebs weighed in on not only the rise of API representation in media, but some of their own exciting upcoming projects as well.

Maitreyi Ramakrishnan, star of Mindy Kaling’s Netflix series “Never Have I Ever,” discussed the merits of finally having a show about a South Asian American girl’s adolescent experience. “It’s only getting better, and it’s really nice to know that young South Asian girls can see [my character] Devi and say, ‘I can be in a show like that. I can have that much screen time and not be cast away after one episode,’” Ramakrishnan said.

“The Scorpion King”’s Kelly Hu and “Silicon Valley” star Jimmy O. Yang both acknowledged the great steps made in representation so far, and called for even more representation on sets. “There’s so many more Asians in lead roles and on television, but we can’t get enough,” Hu said. “We need more, in front of and behind the camera.”

As for upcoming projects, a slew of celebs eagerly commented on future ventures. Destin Daniel Cretton and Simu Liu, both best known for Marvel’s “Shang-Chi and the Legend of the Ten Rings,” teased a sequel together. “He’s going to be in it. There’s your tease,” Cretton said, gesturing to Liu.

When asked about the shooting schedule, Liu said, “I have no idea [when we will start shooting]. We’ll get to a place where Destin will go do his thing and we’ll figure out what other amazing stories there are to tell with this character, and then at some point, he’ll be like, ‘Let’s do this!’”

Melton, meanwhile, kept things under wraps for the most part. “I got something cool that I’m doing that’s getting worked out right now,” he said. “Can’t tease too much about it.”

Check out the full videos to see these stars take on the questions of representation and what’s next for them! 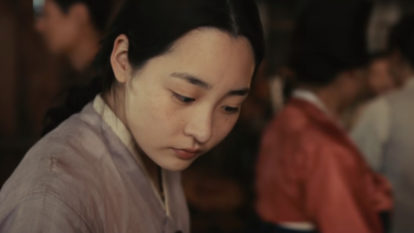 The multigenerational drama, based on the family epic by Min Jin Lee, will premiere March 25 on Apple TV+.