Editor’s note: For each issue, we choose an unproduced screenplay and present it to you as a one-page description of the proposed movie. A talented and promising illustrator then reimagines the story as a picture (see left). If you have a submission, please email editorial@charactermedia.com with your feature film treatment or screenplay.

Introducing Ryan Lee. Lee was born in Paris, France and raised in Palo Alto, California. Ever since viewing a VHS copy of “Mousehunt” when he was 6 years old, he’s wanted to make movies. He attended the University of Southern California School of Cinematic Arts, where he majored in film production and wrote several thesis films. Since graduating, he’s developed feature films, television pilots and interactive web series scripts in multiple genres. He was recently chosen to be a 2018 Coalition for Asian Pacifics in Entertainment New Writers Fellow. He has also worked as a freelance movie reviewer, a public access TV technician and a Little League umpire, where he learned how to get yelled at by both children and adults. His career goal is to have season tickets to the Yankees one day.

In Beijing, two Chinese American cofounders of a college counseling company that uses fraudulent means to cheat their clients into college (fabricating transcripts, ghostwriting essays, etc.) fight to save their company after an American journalist reveals their unethical activities.

Gil Huang, 27. Gil presents himself as a smooth-talking CEO to give his business an air of legitimacy—a facade that he’ll fight tooth and nail to protect. A son of Chinese immigrants to the U.S., Gil has long felt that American society, especially the entire college education system, has refused to accept him, and that bitterness has metastasized into a desire for revenge. Moving to Beijing and starting Infinite Education is his way of both trying to find a place where he can feel “at home,” and get back at the system that wronged him.

Sam Chen, 27. Gil’s partner in crime and cofounder of Infinite Education. An essay-writing and test-taking specialist, Sam is the muscle of the operation, coordinating the ringers and gunmen to get their clients into the best schools possible. He enjoys his job, and he’s good at it —until he’s forced to confront the ethical questions he’s been ignoring when his own brother, back in the U.S., goes through the college admissions process himself. Now, as the truth of Infinite Education’s practices threatens to reveal itself, Sam must decide where he stands.

Zara Bell, 25. Gil’s girlfriend and test-prep tutor at Infinite Education, who has slowly become disillusioned with the business’s unethical activities and is considering—without telling Gil—a move back to the U.S. As an African American woman, she has her own set of difficulties with living in China and also struggles with how to define herself in this morally gray world.

After just a few years of operation, Infinite Education has become one of the premiere college-counseling firms in Beijing, with clients from all provinces and countless student success stories.

But just in one single day of misfortune, the entire company comes to the brink of collapse, as the lies and deception that Huang and Chen have built their empire on begin to be uncovered.

As the day begins, Huang is contacted by an American journalist, asking for comment on a story they will be publishing that evening. The story: that Infinite Education has been regularly using dishonest means to get their clients into American colleges. Huang and Chen immediately go into damage control mode. Chen figures out their legal options while trying to find ways to insulate their clients. Huang, meanwhile, is on a warpath and sets out to discover who within the company leaked the information to the press.

They have until 7 p.m. to somehow stop the story, or their company will be destroyed.

My friend and collaborator, Clarence Deng, and I were both raised in Palo Alto, California, a town best known as the home of Stanford University, and more recently, as the former base for Google and Facebook. Around the country, Palo Alto is also known for its high-achieving—and highstress—schools.Schools where it often felt like a 4.0 GPA was average, and anything below an A- was a failure.

When faced with such pressures and impossibly high standards, people develop very different strategies and coping mechanisms. Some fight harder. Some burn out. Some look for shortcuts.

That’s where the “Ringmen” come in. The Ringmen (“ringers” and “gunmen”) are the people who do the dirty work. When you need a college application tweaked, an essay ghost-written, a test taken on your behalf—you call the Ringmen.

I found the true stories of companies like these to be fascinating and served as the main source of inspiration for the story. On a deeper level, though, I was compelled to write about the characters of Huang and Chen because they were similar to us: Chinese Americans who faced off with an admissions system that not only causes psychological and financial damage, but also puts them at a stark disadvantage because of their race.

With “The Ringmen,” we hope to illuminate those issues plaguing students while telling a story about the people struggling to find their place inside of one of the most convoluted engines of the American Dream: higher education. 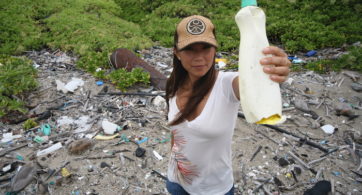 In the darkness of the deep sea off the Hawaiian coast, Angela Sun scuba dives with huge black manta rays, her eyes wide behind goggles as one of the […]