In the darkness of the deep sea off the Hawaiian coast, Angela Sun scuba dives with huge black manta rays, her eyes wide behind goggles as one of the creatures glides over her head. She’s not afraid, though the ray is almost as long as a Fiat car—she’s enthralled, as the burst of silvery bubbles escaping her mouth shows.

It’s just one of the many times Sun has strapped on her fins and gone underwater for a gig. She first made waves in 2013 with her documentary “Plastic Paradise: The Great Pacific Garbage Patch,” which garnered awards at festival circuits across the nation. Six years later, Sun has been featured in “Entertainment Tonight,” “Tedx,” “Coco Eco” and more. She now works as a sportscaster and investigative journalist, and has covered everything from Oakland A’s games to overfishing the world’s oceans.

Sun’s proclivity for finding stories about the big blue stems from her own personal interests. She’s an avid surfer, and grew up in the Bay Area swimming and snorkeling in the Pacific. “I didn’t want to become ‘the plastic police’ or ‘the trash girl,’ and it’s not like I wanted to talk about trash all day long,” Sun says, laughing. “I was just motivated by my passionate curiosity to learn more about things, and there’s something about the ocean, how it draws you near.”

As an ocean-lover, Sun says that her first task was to effect small changes within her Chinese American family, who often ate shark fin soup and used single-use plastics. However, she acknowledges that it’s tough to break old habits. “In China, as more of a developed country, coming across something like single-use plastics was just almost part of the culture,” Sun says. “Even with something as innocuous as boba—you think it’s just a cultural drink, but it’s served with a giant plastic straw, a plastic cup and plastic film. We need to change that narrative and own that as Asian Americans, as people who have this lens, to also see the environmental side and how important it is to address that.”

Outside of her family, Sun is also trying to change the public’s minds about plastics. Though “Plastic Paradise” made a big splash, she hopes to eventually appeal to the broader public, people who wouldn’t necessarily seek out an environmental documentary. In particular, Sun’s goal is to get viewers from her sportscasting job interested in her documentaries and activism pieces. “At a lot of these film festivals where we won a lot of awards, it’s the same people who already know and already care,” says Sun. “How do we reach larger audiences?”

Sun also enjoys pursuing human interest pieces that take her all over the globe, and hosts the travel show “Foreign in the U.S.A.” Although she adds in a playful tone that some of her upcoming work is still under wraps, she says she’s always looking to illuminate underrepresented issues. Through all of her pieces, she reminds her viewers to be aware not just of the world around them, but of themselves and their unique sphere of influence.  “What motivates me is being the conduit to tell,” Sun says. “I want to share stories that are untold, but also to shed light on issues and people who are doing great things in their element, whether it be in sports or news or the environment.” 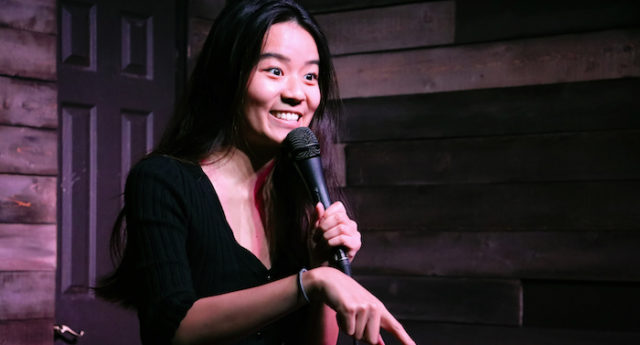 Sierra Katow stands confidently on stage with mic in her hand, only fidgeting when she tucks strands of her long black hair behind her ear. She’s been honing her […]