There’s an old Chinese idiom that says that there are four “flavors” of life: suan (sourness), tian (sweetness), ku (bitterness) and la (spiciness). It’s the basis behind many Chinese cultural cornerstones, like cooking—a good, decent meal needs to be comprised of all four of these flavors—and a life well-lived must have these four elements. But what if something so bitter, like a cancer diagnosis, was your responsibility to tell a loved one? Would you give them the biting truth? Or would you sweeten it?

This is exactly the predicament filmmaker Lulu Wang found herself in 2013, when her Nai Nai, her paternal grandmother, was diagnosed with terminal lung cancer. Unlike hospital protocol in the U.S., the news wasn’t delivered to her grandmother, but to her closest relative, her sister. The prognosis: Nai Nai only had three months to live. The news was devastating. So devastating, in fact, that the family collectively decided not to tell her. It would be too hard on Nai Nai and would make her last days miserable.

So, Wang found herself returning to China for the first time in years for a most unpleasant and unusual family reunion: a wedding. The catch? The wedding, between a cousin and his new Japanese girlfriend, would be a sham. It would serve as a way of getting the family together so they could all say their final goodbyes. Her 2019 film, “The Farewell,” is based on Wang’s fateful trip to China and stars Nora Lum, better known by her stage name Awkwafina, as Billi, an aspiring Chinese American writer. The film made its debut on January 25 at the 2019 Sundance Film Festival, where it received rave reviews and generated considerable buzz, along with a seven-figure deal with distributor A24. It’s been making waves on the festival circuit ever since its release, and made its theatrical premiere on July 12.

Much like her character Billi, Wang really did have a special connection with her grandmother. Nai Nai would visit from China her family’s home in Miami, and the two would share a bunk bed, which led to pillow fights. Wang even lived with Nai Nai for a summer in Changchun, China. “Growing up, I’d be told that I was the closest to my grandmother in terms of who I took after,” Wang says. “She really got my sense of humor, and we’d tease each other. We just really clicked. Like as people, not just because she was my grandma.”

While she was preparing to leave, Wang made the decision to pack a camera in her bag. She wasn’t sure if she could conceal her true feelings from her grandma, so she used the camera as a way to hide. “It was a way to manage my emotions,” Wang says. “I didn’t know how I would react once I got to China. That was the main reason I brought the camera. But ultimately a lot of the footage wasn’t great, and I wasn’t serious about making a project with it. It was more of an excuse to hide, to be outside of the situation, rather than a participant.”

Oftentimes, when reality is made into a movie, something gets lost in translation. The sequence of events are jumbled, tensions become overly dramatized, and emotions are misrepresented. But for Wang, reimagining the events as they occurred to her was of the utmost important. She went through a few rounds of talking with producers who would stay loyal to her vision of her film both in language and in casting. Finding someone who could play Billi was her chief concern. She received hundreds of audition tapes, but one actress stood out. Now it’s hard to find a review of “The Farewell” that doesn’t mention Lum’s performance. It was the first time the actress, better known for her raucous comedic persona, engaged in a drama, and the first time that she accepted a lead role.

“Throughout the process [Lum] was really nervous and didn’t know if she could do it,” Wang says. “But I always knew that she could because I saw it in that tape. It was just trying to get her to believe in herself. She’s used humor as a tool most commonly in her career so far as an actor. I had to pull her away from leaning on comedy as a way to express her character. In a way it was really zen. I just told her in every scene to just think about her grandma, and that was it. To think about losing her grandma. So, she took that to heart and really brought that personal relationship with her.”

Lum first emerged into the spotlight as Awkwafina, the stage persona she crafted for herself—a small but loud- and potty-mouthed Asian woman who brings “that yellow to the rap game,” spitting rhymes about the superiority of her, uh, nether regions in the now infamous “My Vag” music video. At the time of the music video’s release, Lum was working as a publicity assistant at a publishing company, happy to have a stable job but unhappy that she was unable to express herself creatively. The juxtaposition between the tiny Lum, who stands a modest 5 feet 1 inch, and her voice, which she self-describes as “the voice of a 58-year-old divorce attorney,” rapping lewd, witty quips about female genitalia was a hit, and “My Vag” went viral. But it also got her fired.

Rather than slowing her down, getting canned freed her to pursue her creative endeavors full-time. In 2018, Lum landed her first major Hollywood role in “Ocean’s Eight” as Constance. She then went on to steal the show in “Crazy Rich Asians” as Peik Lin Goh, Rachel Chu’s eccentric best friend. There was no calculated formula for her to make this transition from music to movies—she’s just going with the flow. “It wasn’t especially planned,” says Lum. “Music is what I love doing. I still do it off the set of movies. I’ve always had a really strong comedic aspect in my music, and I’ve always tried to insert a strong sense of self. The same could be said about the acting.”

At the time of the interview, Lum was on the tail end of a busy press day in New York City promoting the film, saying it felt good to be back home after moving to Los Angeles. Lum was born and raised in Queens by her Chinese father and her paternal grandmother, after her Korean mother died when she was 4 years old. To this day, she’s very close with the woman who raised her. “I call my grandma everyday,” Lum says. “She’s my therapist and my best friend. She’s very important. My relationship with her is one that could only be really defined by unconditional love.”

And where exactly did the inner fortitude to create Awkwafina come from? Why, her grandmother, of course. Lum credits her own Nai Nai with instilling in her a deep sense of self. “Sometimes I’d come home feeling weird or I’d been made fun of, and my grandma would always be the one that I could talk to. And she would say, ‘Never be ashamed of those things because that’s what makes you special,’” Lum says. “She really believed in that, and it built a specific kind of confidence in me about who I am.”

Still, the prospect of taking on a serious role did bring up some insecurities for Lum. “I think a lot of people assumed that one day I would be like, ‘I wanna do drama!’ and a script then landed at my door and I was like, ‘Oh, a drama script!’” Lum says. “But that’s not really how it worked. I never thought that a script like this could exist yet. I was scared that I wouldn’t be able to carry a lead role. I was scared that my dramatic acting wouldn’t be that good and that my Chinese wouldn’t be that good. But I have a very personal connection to the story. A big part of me did this for my grandma. I really related to the character of Billi, and I was genuinely moved by the story. That’s where my performance comes from.”

It’s Lum’s portrayal of Billi that also propels the film’s exploration of the cultural nuances that exist between being Chinese and Chinese American. It’s been a running theme in Wang’s own life, especially growing up in an era when Wang didn’t see much of her personal experiences reflected in American films, nor in Chinese ones as well. “My parents watched a lot of Asian movies, but in a way they felt of a different generation for me,” Wang says. “But it wasn’t just a generational gap. It was that these films were Chinese and I wasn’t Chinese. My parents related to those stories, but it always felt like those films belonged to them and not to me.”

Wang makes it clear that she doesn’t have an agenda when it comes to her art. She strives to make films that help people “explore a greater sense of grace.” “I don’t like to make films that are very black and white in terms of ‘This is right’ and ‘This is wrong,’” Wang says. “The film is about how we love each other, and how we learn to respect each other’s differences. For me, it’s really just about making work that explores a different side of humanity, and trying to get to a greater understanding.”

Although “The Farewell” deals with the impending death of a loved one, viewers will likely find themselves in a theater filled with an unexpected sound: laughter. “A sense of humor will get you through the really hard times in life,” Wang says. “It’s how we, my family, managed to cope with life. My mother always says the best quality you can have as a person isn’t something that you can just develop; you’re born with it. You have it or you don’t. It’s not beauty. It’s a sense of humor.” In a pinch, the best remedy for the bitterness of life is a laugh. 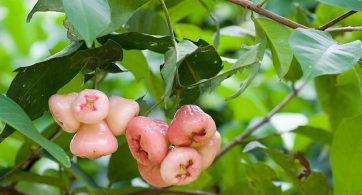 Summer heralds the arrival of some of our favorite fruit: juicy peaches, fresh berries, crisp and cool watermelon. But have you thought about adding something new to your poolside […]