Just the other day, I came very close to working as a series regular on one of my all-time favorite television shows. I had a kick-ass audition experience. I was personally invited to meet the producers, writers and actors from the show. I was on cloud nine, a phone call away from living out a dream. But then… nothing. My mind has been racing ever since.

Was I too nervous? Did I come on too strong? Not strong enough? It’s probably because I’m too handsome for the part. Yeah, that’s it. Once again, I’m too handsome. Damn you, genetics!

Please indulge me in my moment of despair, for I am wounded and in need of validation. You see, I am a sensitive man. I believe that’s what makes me a good artist. But admittedly, on occasion, it has me crying in the shower. It’s a wonder why I chose to be an actor, a profession that many define by the sheer amount of rejection that comes with it.

So what keeps me going, you ask? Well, for one, I love acting. I’m convinced that it’s my life’s purpose. And despite the constant barrage of “no” that comes with the territory, it’s worth it. Just being able to meet those producers and writers and actors was worth my visit to that motherf&%ing stupid show. (Still working through it.)

As much as it hurts, rejection is not without its virtues. It thickens your skin. It teaches you to let go of the things you can’t control, but take full control over what you can. For me, rejection is a clear message that I have to refocus, work harder and, most importantly, embrace what I love doing that much more. As long as I don’t let rejection take me out of the game, in my heart of hearts, I know that one day I’ll be on an even better television show. This show will value the fact that I can’t be categorized—and appreciate having a cast member who’s so damn handsome. 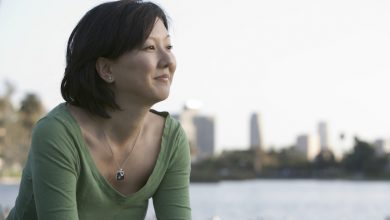 KoreAm readers were first introduced to Kam Redlawsk in November of 2008. A talented young designer, she was afflicted with a rare genetic disorder that causes progressive muscle deterioration […]