Previously only visible in select shows and campaigns, Asian models are now a permanent fixture in most big fashion shows. Whether that’s because Asians have repeatedly shown their buying power as consumers or thanks to a more inclusive fashion industry, these male models have found a place for themselves in front of the spotlight. Here’s a look at six suave men leading the pack on runways around the world.

Discovered on a bus in Oslo, Norway, Jeenu was thrust into the fashion world unexpectedly. But his vintage look and chiseled cheekbones have made him a runway star in London, Paris and beyond. Sri Lankan by ethnicity and Norwegian by nationality, Jeenu represents the perfect marriage between European and Asian aesthetics.

Androgyny is fashion’s favorite feature, and David Chiang does it best. Perhaps it was his striking long, black hair that prompted Karl Lagerfeld to call him a “really beautiful Chinese girl.” Even so, he’s been gracing every major runway since his debut in 2010, pushing the boundaries of conventional male model looks.

British-Korean model Sang Woo Kim is an artist even when he’s not in front of the camera. He’s passionate about creating politically charged art, like the installation he created with peers amidst Brexit protests, which read “U K, U.K.?” Since debuting in 2014, he’s walked for Rochambeau, Vivienne Westwood, Dolce & Gabbana, Dsquared and more. He’s also shot for the cover of Elle Man Vietnam, TOM Magazine and featured in an ad campaign for Puma.

As the first Asian male model signed to be the face of Louis Vuitton, Godfrey Gao threw the doors wide open for male models after him. Standing tall at 6’ 4, his presence is magnetic on-screen in films like The Mortal Instruments: Magnus Bane and The Jade Pendant as well as on the runway. The Taiwanese-Canadian model and actor has over a decade of work under his belt, and is still highly sought-after for his boyish charm and dapper looks.

Life as a model, photographer, yoga teacher, OCR coach and dad can’t be easy, but Hideo Muraoka seems to have found the right balance. Whether traveling to exotic destinations with his family in tow or displaying his physical agility, he looks disarmingly good doing it.

Xu Meen effortlessly transforms between edgy streetwear and refined runway silhouettes. His close-shaved head and sharp jawline cause heads to turn as he powers down the runway for fashion icons like Boss, Moncler, Michael Kors and Prabal Gurung. He’s been most recently featured in Givenchy’s Fall/Winter campaign. In just over a year, Xu Meen has already made great strides in the industry. 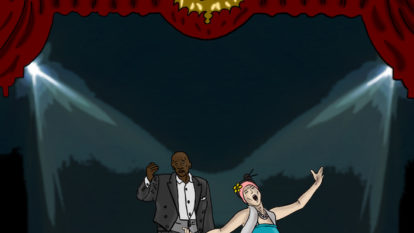 Editor’s note: For each issue, we choose an unproduced screenplay and present it to you as a one-page description of the proposed movie. An illustrator then reimagines the story […]