Editor’s note: For each issue, we choose an unproduced screenplay and present it to you as a one-page description of the proposed movie. An illustrator then reimagines the story as a picture (see left). If you have a submission, please email editorial@charactermedia.com with your feature film treatment or screenplay.

For this month’s contributor, we’re introducing our very own writer, Taylor Park. Born and raised in Southern California, she attended Pomona College where she obtained a Bachelor of Arts in media studies and studied film at the Film and TV School of the Academy of Performing Arts in Prague. While in the Czech Republic, she shot 16mm short films and quickly realized how grateful she was for the invention of digital projection. She has worked as a copywriter, a curator for film festivals and a TV production intern for Legendary Entertainment, where she worked on shows such as Netflix’s “Lost in Space” and Amazon’s “Carnival Row.” She is also an über choir nerd with 12 years of singing experience under her belt.

​In present-day New York City, an aspiring opera singer is given one last chance to pursue her dreams of becoming a world-renowned soprano when she makes it to the final rounds of the Met Opera’s prestigious annual competition. But when she learns her estranged ex-vocal coach is on this year’s panel of judges, she must do everything in her power to ensure that she wins—even if her methods are unethical.

​Eileen, 30. There’s no one as hard-working, passionate and ambitious as her in this industry. At least that’s what she tells herself. She has a “go big or go home” mentality, and sees no point in pursuing her art if she’s not on top. Despite her talent and drive—and a Juilliard Artist Diploma to boot—her opera career still hasn’t kicked off. After so many failed auditions, she’s tired of not being seen and has grown resentful of the nepotism and lack of diversity within the opera world. Although she’s never stood out to music directors before, she’s about to show everyone the prima donna she can be, and the lengths she will go to make it to the top.

Aaron, 25. One of the competition’s most promising contestants, Aaron is a late bloomer who didn’t start formal voice training until he was in college. He is a naturally gifted musician and singer, and his career only seems to be moving forward. As a gay black man, he struggles to find his identity within an art world steeped in dated values and narratives. Friendly and personable, he forms a friendship with Eileen during the competition. His genuine passion and love for music is admirable, and only makes Eileen feel more guilty about what she’s scheming behind his back.

Petra, 61. Cold, blunt and just plain mean. This famous vocal coach is responsible for shaping some of the world’s greatest voices in opera today. But only a few can handle her terrifying lessons and harsh critiques. With her sophisticated air and cool demeanor, nothing seems to faze her. But she never forgets the people who have crossed her—and rarely forgives, either.

Annabelle, 23. A young, bubbly soprano with an extraordinary voice and a beautiful, angelic face. There is much potential for this marketable, up-and-coming star. Hailing from the middle-of-nowhere in Iowa, she is naive and wide-eyed about the world—which rubs Eileen the wrong way. There is no doubt that Annabelle is her biggest competition.

Joel, 36. A brilliant and gifted pianist, Joel is fed up with being a piano accompanist for singers and choirs—but he also has to pay his bills. He has grown jaded and despondent over the years, and cannot stand the narcissistic, diva-like traits he finds in most of the singers at the Met. Sharp and observant, he’s especially suspicious of Eileen and the strange things happening around the opera house.

Ever since she saw a production of Verdi’s “La Traviata” at the Met Opera as a young girl, Eileen dreamed of performing on famous stages as the leading role in an opera. Through hard work and dedication, she got into The Juilliard School, believing it was only a matter of time before her opera career kicked off.

Fast forward eight years later. She is barely making rent, working part-time as an elementary school music teacher and taking on roles at small, local opera houses and college productions. At the not-so-tender age of 30, she is at the last cut-off age for every major opera competition in the country. And it doesn’t help that her immigrant Asian parents are pressuring her to find a “real job” and pay off her student loans. When she learns she has advanced to the final rounds of the Met Opera’s annual competition—the same competition that jump-started the careers of her idols—it feels like a blessing sent down from heaven.

But, of course, fate has other plans. Eileen’s ex-vocal coach from Juilliard is set to be one of the judges on the panel, and they’ve got bad blood. Refusing to lose because of a vengeful, old hag, she takes matters into her own hands—if she can’t beat the system, she’ll just play into it.

Mystery and intrigue haunt the Met Opera House as scandals, bribery, unexplained illnesses and “accidents” occur one after the other. In a business where everyone wants to be on top, it’s easy to forget why Eileen loved singing in the first place. Like one of the heroines in an opera, she must confront her own demons as she spirals down a dark path for the sake of her dreams and ambitions.

When people think of opera, they still think of large women clad in bronze breastplates and Viking hats. But that’s not what the modern world of opera is like today. There’s never been a film or TV series about opera, which is a shame since it is the art form that gave birth to the concept of the “prima donna,” or the diva. And believe me, that aspect of the art still hasn’t changed.

I have a personal connection to this story, since I spent a good amount of my childhood and teen years training in an opera conservatory. Despite all those years of late-night rehearsals, nerve-wracking auditions and soul-crushing voice lessons, I still have love and respect for the art form. From moving music performances to catfights in the dressing room, I’ve seen it all. Those colorful experiences I had during my days of singing have grown into this labor of love, and I hope to share with others this strange, beautiful world of professional opera. 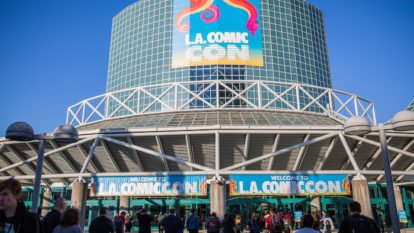 There’s something special about an event that people attend for no one but themselves. For cosplayers, the Los Angeles Comic Con, formerly known as Comikaze Expo and Stan Lee’s […]