This little fish may not look like much, but it’s helping thousands of Cambodian citizens who don’t have the means to afford a more nutritional diet.

Worldwide, iron deficiency anemia affects billions of people. It’s especially evident in Cambodia where nearly half the population is iron deficient. This condition causes overall weakness, fatigue, slow mental development in children, frequent infections and headaches so strong that adults struggle to work. In severe cases, the deficiency can cause death.

Although this condition can be remedied by supplements or cast-iron cookware, these solutions are simply not affordable for many of the poverty-stricken farming families in rural Cambodia. Many iron-rich foods, such as red meat, are also out of reach.

In an effort to help, Christopher Charles — who was conducting epidemiological health research in Cambodia– and his research group distributed iron discs and asked the locals to place the disc in their pot while cooking. However, the locals were too apprehensive about cooking with a giant piece of iron. The group tried once more to convince the locals by creating iron structures that looked like lotus flowers, but once again, the locals did not jump on board.

Finally, Charles discovered that local folklore believed fish were a symbol of goodluck, health and happiness. He then created The Lucky Iron Fish which the locals were much more willing to try.

To use The Lucky Iron Fish, you simply toss in the iron wedge while cooking. The fish is often used to boil water or soup and lemon juice is added for better absorption of the iron. Apparently, food cooked this way does not taste any different and yet it provides 75% of an adult’s daily recommended intake of iron.

According to pulptastic.com, “More than 2,500 people are now using the fish in Cambodia. And after just 9 months of using it every day, a 50% decrease in anemia has been observed, as well as an increase in users’ iron levels.”

And Charles isn’t stopping there. He plans to bring The Lucky Iron Fish to other developing countries suffering from iron deficiency anemia. Of course, the shape of the iron wedge will change and better reflect the culture of each country.

To learn more, check out the official website here.
All photos courtesy of http://pulptastic.com/ 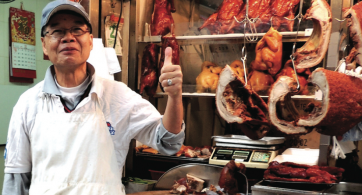 Hong Kong bursts at the seams with global fabulousness, but it’s easy to argue that you’ve not experienced its soul unless you’ve stepped into some of the tiny, […]