Stanislav Tyan stars in Hanaan, a modern-day crime tale set amid a backdrop of the USSR’s forced relocation of Koreans.

Los Angeles’ longest running international film festival is back, and this year features a diverse offering from South Korean cinema, including a gritty crime drama about a fourth-generation Korean-Uzbek police detective and an intimate documentary from a famous filmmaker who decides to turn the camera on himself.

Running Nov. 3 through Nov. 10, the AFI Fest will screen 110 films, including 70 features and 40 shorts that were selected from more than 3,000 submissions across 36 countries. Among those selections are three Korean feature films and one short.

“AFI Fest has always had an eye on South Korean cinema, not just because the quality of those films are always much higher than the normal output of other locales, but also because we know we have a strong Korean audience here in Los Angeles that has been attending the festival for years,” said Lane Kneedler, associate director of programming for the festival.

“South Korea obviously has some of the best film schools and film studios in the world,” Kneedler said. “Their level of sophistication has elevated film as an art form ever higher.”

Festival favorite Hong Sang-soo returns this year (he had two films featured last year) with his latest, The Day He Arrives, a somewhat autobiographical tale that follows a filmmaker, Sungjoon (played by Yu Jun-sang), as he visits an old friend in Seoul and encounters various acquaintances and strangers. As with Hong’s other films, there’s a great deal of drinking and conversing in this one, but a groundhog day element adds a twist. Over several days, the same rendezvous occurs, leading one to wonder if Sungjoon is leading a ritualistic life or reliving the same day over and over.

In Arirang, we see a man who’s used to calling the shots from behind the scenes step in front of the camera as the subject of his own documentary. After a near-fatal accident involving the lead actress on the set of his film, Dream (2008), renowned director Kim Ki-duk retired from filmmaking and retreated to the mountains of Korea. Through self-interviews, he shares his reasons for leaving the industry and his struggles as an artist. At one point, he questions his own status as a celebrated filmmaker in South Korea—someone who earns national medals after he wins international honors. “Makes me wonder if they actually saw my films,” he says of his fellow South Koreans.

The third feature film, Hanaan, comes from a new name in Korean cinema. Ruslan Pak, born in Uzbekistan, is a fourth-generation Soviet Korean from the territory of the former Soviet Union. He started filmmaking in 2001 and worked for several years as an assistant director. In 2006, he entered the graduate program of the Korean National University of Arts, and Hanaan is his first feature film. Set in Uzbekistan, it tells the story of Stas (played by Stanislav Styan), a police detective who, bent on avenging the death of his friend, infiltrates the Uzbeki underworld. At its core, the crime drama is really an exploration of one man’s longing to resolve his people’s diaspora and find his hanaan, his promised land.

The short film, Broken Night, an entry from the Korean National University of Arts, will also be screened.

For the third consecutive year, AFI Fest is continuing its offer of free tickets to all screenings. The new AFI Fest Cinepass, the Special Screenings pass and Patron Passes – which ensure access to sold-out presentations and other high-demand films and events – are on sale now. For screening schedule and ticket information visit AFI.com/AFIFEST, call 1.888.AFI FEST, or go on-site at the AFI FEST box office at the Hollywood and Highland Center in Hollywood. 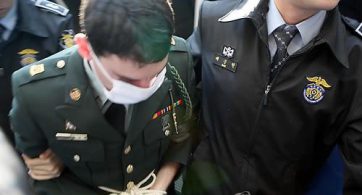 An American G.I. stationed in South Korea was convicted of rape and sentenced to 10 years in prison, the harshest sentence for a U.S. serviceman in almost 20 years, […]