Most people probably know Sandra Oh as Dr. Cristina Yang from Shonda Rhimes’ “Grey’s Anatomy,” but the full breadth and depth of Oh’s career spans several genres and decades, a testament to her versatility as an actress.

This week, we learned that Oh will play the title role in BBC America’s upcoming series “Killing Eve.” Take a stroll down memory lane and check out some of these old-school pictures of Oh from our archives:

Oh was born in Canada to Korean immigrant parents, and some of her first acting gigs included a TV biopic called “The Diary of Evelyn Lau,” in which Oh played the eponymous character, and a family drama “Double Happiness,” which ended up being her big break back in 1994.

Answering phones was just one of Sandra’s many jobs while on “Arliss.” She caught some critical attention during her work on the show’s six-season run.


Here’s Sandra Oh answering more phones in Don McKellar’s “Last Night,” a 1998 black comedy film about a group of family and friend preparing for the end of the world:

The film was received fairly well by critics and they praised Oh’s acting in particular. 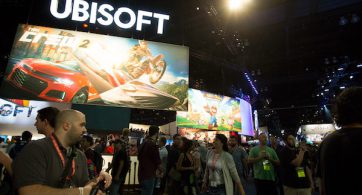 E3 2017 kicked off this past weekend, with exhibits inside the Los Angeles Convention Center and press conferences held by the leaders of the video game industry announcing their […]