Chancellor Angela Merkel pledged Germany’s support Wednesday during a visit by South Korea’s president for efforts to unify the Korean peninsular, saying its own reunification gave it a “duty” to help others.

“We would like very much to support Korea in this important issue,” Merkel told a joint press conference with President Park Geun Hye, who is on a state visit to Germany.

“Germany was divided for 40 years, Korea is in such a situation in the meantime” as the 1950-53 Korean War concluded with an armistice rather than a peace treaty, which means the two sides technically remain at war.

A day after North Korea test-fired two missiles, South Korea captured a fishing boat from the North that had crossed into South Korean waters, officials say.

The action comes as tensions between the two Koreas are rising once again. On Wednesday, North Korea tested two medium-range ballistic missiles, firing them into the ocean.

N Korea and the myth of starvation
Aljazeera

One of the most commonly cited cliches is that North Korea is a “destitute, starving country”. Once upon a time, such a description was all too sadly correct: In the late 1990s, North Korea suffered a major famine that, according to the most recent research, led to between 500,000 and 600,000 deaths. However, starvation has long since ceased to be a fact of life in North Korea.

Admittedly, until quite recently, many major news outlets worldwide ran stories every autumn that cited international aid agencies saying that the country was on the brink of a massive famine once again. These perennially predicted famines never transpired, but the stories continued to be released at regular intervals, nonetheless.

In the last year or two, though, such predictions have disappeared. This year, North Korea enjoyed an exceptionally good harvest, which for the first time in more than two decades will be sufficient to feed the country’s entire population. Indeed, according to the recent documents of the FAO (Food and Agriculture Organisation of the United Nations), North Korea’s harvest totaled 5.03 million tonnes of grain this year, if converted to the cereal equivalent. To put things in perspective, in the famine years of the late 1990s, the average annual harvest was estimated (by the same FAO) to be below the 3 million tonne level.

North Korean leader Kim Jong Un’s distinctive hairstyle is the ‘do of the day on the Internet, thanks to a viral report that every male university student in the capital is now under orders to get a buzz just like it. But it appears the barbers of Pyongyang aren’t exactly sharpening their scissors.

Recent visitors to the country say they’ve seen no evidence of any mass haircutting. North Korea watchers smell another imaginative but uncorroborated rumor.

The thinly sourced reports say an order went out a few weeks ago for university students to buzz cut the sides of their heads just like Kim. Washington, D.C.-based Radio Free Asia cited unnamed sources as saying an unwritten directive from somewhere within the ruling Workers’ Party went out early this month, causing consternation among students who didn’t think the new ‘do would suit them.

The content of the hidden-camera footage, which could not be independently verified, was released by a South Korean pastor, Kim Sung-Eun, known for helping North Koreans escape to Seoul.

The grainy video included footage of a group of men and women, speaking with North Korean accents, drinking beer, singing, dancing and kissing in a South Korean-style karaoke “room salon”.

“This is a North Korean equivalent of a room salon, in the form of a restaurant combined with a karaoke where women serve male clients,” Kim told reporters in Seoul.

President Park Geun-hye of South Korea and Prime Minister Shinzo Abe of Japan met, at last, on Tuesday. The meeting — with President Obama on the sideline at the nuclear security summit meeting at The Hague — was the result of intense behind-the-scenes American diplomacy in an effort to mend the seriously deteriorated relations between the American allies in East Asia.

Ms. Park and Mr. Abe had not met since each came to power more than a year ago, breaking a tradition of South Korean and Japanese leaders getting together soon after taking office. Ms. Park refused to see Mr. Abe, saying his government showed a “total absence of sincerity” in addressing the suffering Japan inflicted upon colonized Korea during the first half of the 20th century. Mr. Abe made things worse in December by visiting the controversial Yasukuni Shrine, which honors Japan’s war dead, including war criminals. There was little chance of the two leaders beginning to mend relations without the American push.

The leaders of South Korea, the U.S. and Japan sat down together on Tuesday on the sidelines of the Nuclear Security Summit at The Hague. The meeting, which took place at the U.S. Embassy in the Netherlands, came at the urging of U.S. President Barack Obama.

The three leaders vowed to stand together against threats from North Korea. “Over the last five years, close cooperation between the three countries succeeded in changing the game with North Korea,” Obama said. “Our trilateral cooperation has sent a strong signal to Pyongyang that its provocations and threats will be met with a unified response.”

His holding company bought Stratford Square shopping center on East Boulevard and built a $4.5 million bowling center there. It also bought the shuttered Up the Creek restaurant nearby, remodeled it and opened it as Sushi Yama.

Food waste around the world
The Guardian (U.K.)

South Korea
Jeong Ho-jin dons a pair of plastic gloves to show off his most proud achievement as a district official in Seoul, and then uses his keys to unlock a large, rectangular contraption that looks like some kind of futuristic top-loading washing machine. Loaded with bins half-filled with decomposing ginseng, lettuce and other meal remnants, this, it turns out, is South Korea’s high-tech solution to food waste.

Jeong works in one of two districts in Seoul where the high-tech food waste managementprogram is being piloted. The program works by giving each household a card that has a radio frequency identification (RFID) chip embedded in it containing the user’s name and address. They scan their card on a small card-reader on the front of the high-tech bin to get the lid to open, then dump the food waste into the bin and onto the scale at the bottom, which gives a numerical reading of the waste’s weight and disposal cost.

“Before this everyone paid the same flat rate [for disposal] and they would just throw their food waste away without thinking,” said Jeong.

Vancouver’s only Korean community centre has undergone a facelift and will officially reopen its doors April 1.The centre, which is located at 1320 East Hastings St. and has housed the Korean Society of B.C. for Fraternity and Culture since 1991, received a grant from the federal government in April 2013 and began renovations the next month. The grant, from the Community Infrastructure Improvement Fund, provided $226,602 toward the project and the Korean Society and Korean Senior Society matched it with support from the Korean government and member donations. Vancouver boasts the highest Korean population in the country at over 50,000 people.

The video, which was first uploaded in March 2012, had slightly more than 100 million views as of about 2 p.m., making it the forth South Korean video to hit the milestone, following Girls’ Generation’s “Gee” and Psy’s “Gangnam Style” and “Gentleman.”

BigBang became the first K-pop boy band to do so.

Korean Journalist Seeks To Find Out If Beanballs Hurt
Deadspin

One Korean journalist for KBS worked on a feature on baseball players being hit by pitches, and did some firsthand reporting to find out if it hurts to be hit by a baseball. It does!

The whole video report—which isn’t embeddable—is worth watching, and you don’t need to understand Korean to figure it out: Pitches to the head, whether intentional or not, are causing injuries in baseball. The best part is definitely the high-speed camera footage of baseballs hitting a wash basin and frying pan, set to music that sounds like the Halloween theme.

As promised, POT is a powerful ode to Korean cuisine by one of the most notable Korean-American chefs in the country. Roy Choi opened POT inside The Line Hotel to the public for lunch yesterday, introducing dishes that seem whimsical and inventive on paper, yet incredibly grounded, flavorful, and intense to a fault on the plate. Think “Boot Knocker” stew, Choi’s take on a dish that Korean mothers make after school’s. Filled with Lil’ smokies, Spam, ramen noodles, and more than a few dollops of red chili flakes, it’s about as rich as the cuisine can get, without getting too serious.

The gently wrapped Kat Man Doo dumplings come dressed in soy, chilies, and scallions for maximum effect, while chewy squid gets tossed with rice cakes, onions, and gochujang. In almost all steps, Choi is taking the cuisine of his motherland and putting an elegant, chefly touch that elevates and refines flavors.

Probably the Worst Diary of Anne Frank Cover Ever
Kotaku

Usually, covers of The Diary of Anne Frank feature black and white photos of its author, Anne Frank. Or, you might see tasteful illustrations. You don’t usually see photos like this!

As recently pointed out by Korean-born Twitter user Che_SYoung, a version of this book was apparently released in South Korea years ago by an unscrupulous publisher:

It looks like a Harlequin romance novel! For the past few years, the image of this cover has been floating around online (as I mentioned, it is supposedly real!), and it even pops up when you Google Image search The Diary of Anne Frank in Korean:

[Korean-born textile artist Lee Young-min] currently holds bojagi workshops and leads a community bojagi project at the Los Angeles County Museum of Art (LACMA). The program will take place on April 12, May 3 and June 7. The reservations of the workshops for April 12 have been already filled.

“Many parents with their children are taking part in the workshops. They are all beginners and not skilled but they return home with satisfaction of their completion of bojagi artworks,” she said.

She has organized numerous workshops, classes and demonstrations on Korean arts and crafts around the Bay Area. Recently she demonstrated her bojagi and “maedeup” or Korean knots in Asian Art Museum in San Francisco as part of the Asia Alive Program. Lee also participated in Oakland Museum’s Lunar New Year celebration with her bojagi and maedeup artworks. 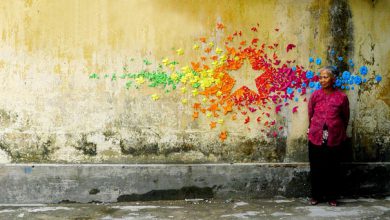 When Paris-born Mademoiselle Maurice spent time in Japan, she experienced earthquakes, a tsunami and the nuclear power plant explosion of Fukushima. The devastating experiences inspired the 29-year-old artist to remind […]