(SPOILER) After the anticipating Episode 5 of The Walking Dead‘s Season 6, we have been so anxious to learn whether Glenn did actually get torn up by that zombie.  Many TWD fans are also bursting at the seams of anticipation for the next episode.  We’re scared too, but to make our TWD fans a little bit more cheery and set aside what happened for now, we’ve decided to make a very important list in dedication for Glenn:

Top 5 Reasons We Love Glenn from The Walking Dead

When we took a look at the statistics of people of color who actually win Emmy awards, the results were shocking. Needless to say, an Asian popping up on our television screen is rather rare. This is where The Walking Dead‘s Glenn breaks the mold. Not only is Glenn a popular Asian character, he has proudly pointed out that he’s Korean American. By simply distinguishing this fact, he has stepped away from the token Asian character.

Whether he’s risking his life to be zombie-bait..

..offering to be the distraction so others can get away safely…

..getting Plan B pills for Lorrie (because she couldn’t get them herself, right?)..

Or covering himself up in bloop and guts.

Glenn has continuously risked his life for the safety of his group.

Although the members of the group are clearly not his blood relatives, Glenn has taken on the mentality that they are.  He takes care of them, protects them, and shows undying loyalty. His anger towards the Governor for what he did to Maggie makes this clear. These are the people he loves and will do anything for.

No, he is not  the sidekick who’s there purely for humorous reasons. He’s one of the few characters who actually provide love and romance amidst the horrifying setting.

5) In the middle of death, blood, and human’s being eaten, he brings us THIS

Be sure to keep us with us on The Walking Dead and let us know what you think! 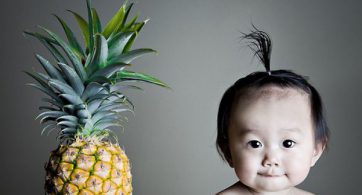 We’re not quite sure when this trend started, but cute Asian babies rank right up there with puppies and memes when it comes to social media sites. A […]