Just about everyone seems excited for Lea Salonga’s return to Broadway alongside George Takei and Telly Leung in the new musical Allegiance. The musical, which was inspired by Takei’s actual childhood experiences, premiered in 2012 at the Old Globe Theatre in San Diego. Much to the excitement of fans, Allegiance is now set to open on Broadway by November 2015, with previews as early as October 2015.

If you’re unfamiliar with the breathtaking talent of Lea Salonga, then today’s your lucky day! We’ve rounded up five of the many, many moments we fell in love with Salonga to give you a brief glimpse into why she has so many loyal fans.

1) A Disney Legend
You’ll be hard-pressed to find someone who doesn’t mention Disney when they talk about Lea Salonga’s achievements. In 2011, Salonga was honored as a Disney Legend and for good reason! Not only did she perform at the grand opening of Hong Kong’s Disneyland and help voice Mrs. Kusakabe in Disney’s English dub of My Neighbor Totoro, she is also famously known as the singing voice of Princess Jasmine in Disney’s Aladdin and as Mulan in Disney’s Mulan. So the next time you sing along to “A Whole New World” and “Reflection,” remember that the powerful voice belongs to Salonga.

2) On Stage
In 1989, Salonga was cast as the lead role in the musical “Miss Saigon.” This quickly catapulted her into fame as she won the Olivier, Tony, Drama Desk, Outer Critics and Theatre World award for the same role. She then went on the being the very first Asian cast as Eponine in “Les Miserables” and later as the character Fantine. She spoke to Rappler of her fond memories of the production saying, “For me, having performed in the two anniversary concerts was the most amazing experience ever. Sitting and working amongst some of the most amazing talent assembled felt like a dream, and I wasn’t entirely sure I belonged in this group. But it was amazing celebrating the show with many thousands of people [who] loved it as much as I did, or even more so.”

3) Breaking Records by Making Records
Needless to say, Salonga has received endless praise from the Filipino community. She made the Philippines especially proud by breaking a number of records. For instance, in 1993, Salonga became the first Filipino artist to sign on to an international label, Atlantic Records. She is also the very first Filipino artist to receive a major album release and distribution deal in the United States.

4) Humanitarian Work
On October 15, 2010, Salonga was appointed Goodwill Ambassador for the Food and Agriculture Organization (FAO) of the United Nations. The FAO Goodwill Ambassadors Programme was created to try and raise public awareness on issues relating to hunger and poverty. “It’s an incredible honor, but it’s also a great challenge,” Salonga said of being a Goodwill Ambassador during an interview. “I’m from the Philippines and there are millions of people who are hungry and who are poor and the issue of poverty in my country is so great. Hopefully, people back home will turn their attention to this campaign and to what FAO is trying to do.”

5) Her Inspiring Story
Okay, so it’s obvious that Lea Salonga is talented, but what about her as a person? Watch just a few interviews with Salonga and you will not only be a fan of her singing, you will also be a fan of her personality and her story. At 17, Salonga was a pre-med student, but things took an instant turn when she nailed the audition for the lead role in “Miss Saigon” after singing “On My Own” during her– a song from “Les Miserables” that she would go on to sing on the Broadway stage. 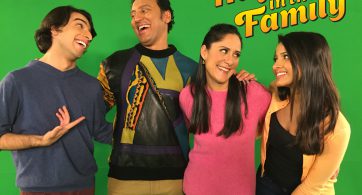 Recognize Aasif Mandvi? You should. Aside from a number of film and television show appearances, this Indian American actor and comedian is a regular correspondent on The Daily Show and […]