Ever since she received seven violation points during a city health inspection in June, she’s been fearful about how her restaurant prepares and stores kimchi, a traditional fermented dish that is a staple in Korean cuisine. The violation points resulted from five pounds of kimchi being left at room temperature and exceeding the city Department of Health’s 41-degree temperature requirement for cold foods, according to the inspection.

Korean restaurant and business groups say they are all too often unfairly penalized by the health department because their fermented foods are determined to be above 41 degrees, the temperature below which city rules require potentially hazardous prepared cold food be stored.

A Great Falls man has admitted he played a key role in what authorities have described as one of the most brazen federal contracting scams in U.S. history, according to court records that became public Monday.

Young N. Cho, who also goes by the first name of Alex, pleaded guilty to conspiracy and bribery charges at a secret hearing in September — just weeks before federal agents arrested four other men in a $20 million scheme that targeted the Army Corps of Engineers.

Cho, 40, was chief technology officer of Nova Datacom, a Chantilly-based information technology company that did work with the Army Corps. His role in the scam began in 2007 when he began passing kickbacks to two program managers at the Army Corps in exchange for lucrative contracts, according to court papers.

LA native Steve Cha has a B.A. in Asian American Studies from UCLA and is currently working on an M.A. in theology at Fuller Theological Seminary in Pasadena. Along the way, he also worked for several years as a professional background extra.

Earlier this year, Cha published a book about his on-set experiences called Hollywood Mission: Possible. With Christmas and Tom Cruise upon us, he is re-promoting a tale of, essentially, the Tim Tebow of background extras:

During his three-year journey, Steve evangelized many famous actors, actresses, directors, and aspirants in Tinsel Town… Steve’s revealing autobiography recounts how the gospel was shared with celebrities such as Steven Spielberg, Brad Pitt, Harrison Ford, Dan Aykroyd, and many other stars.

“Dark Knight Rises,” the latest in the line of Batman movies from Christopher Nolan, is slated to hit theaters in July of 2012. But the full trailer hit the Internets over the weekend and guess who makes a cameo: Hines Ward!

We already knew that a slew of Steelers players were playing roles in the movie as members of the Gotham Rogues, whose home field is set at Heinz Field, but not until my younger brother chatted me on Sunday did I realize that Ward was actually in the preview.

You can check out Ward’s appearance at the 1:15 mark below as he runs from not just defenders, but a slew of explosions set by Bane, the movie’s villain, who’s basically like an evil version of Rob Gronkowski, who is also hell-bent on blowing up Heinz Field (only metaphorically) and quite clearly a efficient killing machine created by scientists.

You can walk all the way around it for hours, but to fully experience artist Chul Hyun Ahn’s “Void Platform,” you have to take off your shoes (as signs prompt you to do) and walk out onto it.

The “out” inserts itself in that sentence because of the nature of the piece. In the front gallery at C. Grimaldis Gallery on North Charles Street, Ahn has constructed a low 10-foot-by-8-foot plywood-faced platform that appears to cover a yawning pit descending through the floor as far as the eye can see, albeit a pit lined with subtle bands of greenish lighting. You find yourself testing the surface with your sock-encased toes, curious to know if it will hold your weight. It will, but you hesitate a little anyway. You step onto the smooth surface and stand over what seems to be infinite space receding away below your feet. But if the surface of the piece didn’t hold your weight, you’d drop a mere 16 inches onto Grimaldis’ wooden floor.

With so many foreign travelers visiting Korea on shopping sprees, it seems Korea has been busy devising ways to say “visit often’ and “thank you” at the same time.

There is so much special treatment for foreign travelers, we wonder why Koreans aren’t more envious.

Here are five benefits of being a foreign traveler in Korea. 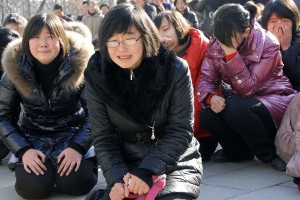