A Bay Area columnist weighs in after it was revealed that Neiman Marcus security had red-flagged state Assemblywoman Mary Hayashi during a previous visit. Hayashi, the first female Korean American to serve in the California Legislature, was arrested for felony theft on Oct. 25.

“Red,” Frampton’s debut, arrives Dec. 6 on Universal Republic. She says the album is far more upbeat than Meg & Dia’s three albums and four EPs, owing to her collaborations with other writers in Los Angeles, Nashville and London. Without her older sister to split writer duties — “We don’t work together; she writes her songs and I write mine” — Frampton found the experience different from what she expected.

“This record is very personal, almost uncomfortable,” the 24-year-old artist says after doing a promotional concert at the Hollywood office of Reveille Productions. “I felt very alone on this record. On our last [Meg & Dia] record, we were stuck in this little cabin sharing bedrooms, just the five of us. The guitar amps were in the living room.

The footage aired on state television Tuesday showed Kim and his heir-apparent Kim Jong Un watching tanks, aircraft, warships and rocket launchers firing at targets on mountains. Dozens of troops were seen parachuting from a plane.

The two Kims were seen speaking to each other as they watched the drills from an enclosed viewing stand with senior military officers.

A ban restricting all South Korean gamers under 16 from playing online games between midnight and 6am is now in full affect.

The bill, variously known as the Shutdown Law or Cinderella Law, had been contested but was eventually passed.

At this stage the ban only pertains to PC and console based networked games including Xbox Live, PlayStation and multiplayer dominions such as World of Warcraft. The government says that within two years networked games using mobile phones will be included in the ban.

Like newspapers all around the world, North Korea’s biggest newspaper Rodong Shinmun is apparently adjusting to new technology.

Word is out that Rodong Shinmun is now providing news on cellphones in Pyongyang. Chosun Sinbo, a newspaper in Japan run by the General Association of North Korean Residents in Japan, published a story about it on Saturday.

It’s not quite right to say the newspaper has developed an “app” since there aren’t yet smartphones in North Korea. It appears Rodong Shinmun is sending out multimedia messages, or MMS, with stories.

The state has agreed to pay $250,000 and create a $100,000 scholarship fund to settle a $43 million wrongful death lawsuit brought against Virginia Tech by the family of a student who committed suicide, according to a court order

Additionally, Virginia Tech will establish a $100,000 scholarship in Kim’s name, place a memorial plaque somewhere on campus and enact a policy of considering immediate notification of the parents or guardians of any student who is thought to be suicidal.

The Kim family brought the action in Fairfax Circuit Court in 2009 to “learn why Tech didn’t follow its protocols” in responding to a warning that Kim was suicidal, plaintiffs’ attorney Gary Mims wrote in a statement.

Ahn-joo is the Korean word for pub food. It’s what Debbie Lee serves at her newly opened Ahn-Joo, a Korean snack bar in the Americana mall in Glendale. No liquor there, but Lee frequents Koreantown pubs so she knows the dishes well. And she adds her own spin to come up with a modern take, even turning rice cakes into nachos.

Nothing is cheffy or pretentious. “I’m a cook. At the end of the day, I want to serve people the food that I want to eat,” she says.

For the past month, the biggest story in South Korea’s stock market has centered on a five-piece boy band called Big Bang, and a couple puffs of marijuana.

News that the Big Bang’s front-man had reportedly tested positive for pot threatened to put a crimp in the initial public offering of YG Entertainment, the label responsible for some of the biggest acts in Korean Pop. The concerns were for naught. Last week, buyers snapped up YG Entertainment’s stock like teenagers trying to score tickets to their favorite boy band’s show. The company’s share price more than doubled on its first day of trading, reaching roughly $67 as buyers ordered 561 times more stock than was available. Its market cap now sits at roughly $340 million.

At Taichung Intercontinental Baseball Stadium, the Lions, the 2011 champion of the Korea Baseball Organization (KBO) overcame an early deficit against the Hawks, the Nippon Professional Baseball (NPB) champion. Samsung’s starter Jang Won-sam settled down after a shaky start and the bullpen took care of the rest, as the Lions became the first KBO club to win the Asia Series since it began in 2005. The Lions also avenged a 9-0 loss to the Hawks in the round-robin phase of this tournament. 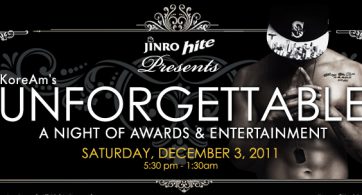 Tickets to the 2011 Unforgettable gala are SOLD OUT but you can still go to the after party presented by Hite/Jinro. This year you can munch on delicious Korean-Mexican […]