A limited series of “Little Fires Everywhere,” based on Celeste Ng’s bestselling novel, is on its way to Hulu.

According to the streaming service Monday, which announced the straight-to-series order as its latest Hulu Original Series, the project will be executive produced by and star Reese Witherspoon and Kerry Washington through their companies Hello Sunshine and Simpson Street, as well as ABC Signature Studios.

The book, released in 2017, is set in the Cleveland suburbs and follows the affluent Richardsons as they deal with a burnt-down house, a mysterious mother and daughter who disrupt their picture-perfect lives and the adoption of a Chinese American baby.

“At Hello Sunshine, we strive to shine a light on female-driven stories that are rooted in inspiration, emotion and truth — all of which form the bedrock of Celeste Ng’s ingenious work,” Witherspoon, who chose the title for her book club last year, said in a statement. Witherspoon’s Hello Sunshine is one of the companies behind the award-winning “Big Little Lies” on HBO. “We are confident that [Hulu] will use this story to spur a long-overdue dialogue around race, class and what it means to be a mother.”

Washington, in a statement, said that “as an actress, I am floored to have the opportunity to work alongside Reese Witherspoon exploring the rich themes of this story playing these dynamic characters.”

Hulu obtained rights to the project after a reported multiple-outlet bidding war, according to the Hollywood Reporter.

Following the announcement, Ng wrote on Twitter that she is “ecstatic” about the series.

So, some news: ECSTATIC that @RWitherspoon and @kerrywashington will be bringing LITTLE FIRES EVERYWHERE to @hulu!! https://t.co/S0JD4j7NJG

So do we @hellosunshine Let’s bring this one to life!! @kerrywashington @hulu https://t.co/gMzvrawpVi

“Celeste wove a beautiful, riveting story that spoke to all of us, and when we heard the vision … we knew immediately that we had to bring it to Hulu,” the streaming service’s Chief Content Officer Joel Stillerman said. “We’re honored to bring this powerful story to the screen with Hello Sunshine, in their first studio project. This is exactly the type of compelling and culturally relevant content that embodies our Hulu Originals brand.”

Hulu’s other original series includes “Catch-22,” an upcoming adaptation from George Clooney of the classic novel; “Castle Rock,” from J.J. Abrams and Stephen King; and “The Handmaid’s Tale,” which has won multiple Emmys and Golden Globe Awards. 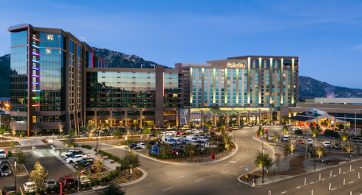 When Pechanga Entertainment Center opened in California’s Temecula Valley in 1995, it was housed in temporary facilities, and run by 135 employees.   Twenty years later, in December 2015, […]