But are you single this summer? Don’t feel too bad. These seven eligible Asian bachelors and bachelorettes in film and TV could use a summer fling as well.

Despite the nasty Twitter storm that ignited over her casting, we support all things Rose Tico (Kelly Marie Tran). The first lead character of the series to be a woman of color, Rose is a bubbly, lovable Resistance fighter. She clearly has a thing for Finn (John Boyega), but given his potential history with Rey (Daisy Ridley), a nasty love triangle could form in the next “Star Wars” installment.

While Dev (Aziz Ansari) and Arnold (Eric Wareheim) struggle on a Tinder-esque dating app, Brian (Kelvin Yu) has no trouble finding a date. It’s no surprise, as the Taiwanese American character is a likable, confident professional. For those not looking for love, Brian is also a great friend who is always supportive of Dev’s acting career, even though his friend didn’t invite him to go see Father John Misty with him.

Okay, so Mantis is technically an insectoid-like alien who was raised by a god, but she’s played by Pom Klementieff, so we’re counting her in. The often melancholy “flea with a purpose” has provided Marvel films with some of the most endearing moments in the cinematic universe’s history, including her butchered “kick names, take ass” line. Despite the obvious romantic tension between her and Drax (Dave Bautista), Mantis would be better off being around someone who doesn’t call her “ugly.”

The racially-ambiguous Insta-comedy Asian Baby Boy Zan (Freddie Kuguru) is the definition of “summer fling material.” You’ll have a lot of fun with the jokester, but you’re unlikely to find an enriching long-term relationship. On the plus side, he’d be a great IG boyfriend and has an elite meme game.

Shockingly, “Pacific Rim” ended without Mako Mori (Rinko Kikuchi) and Raleigh Becket (Charlie Hunnam) becoming an item. To be fair, it’s better that way, as Mako was “Miss Independent” throughout the sci-fi flick.

7. Cho Chang (“Harry Potter and the Goblet of Fire”)

Despite Harry Potter’s massive crush on her and her long-term relationship with star athlete Cedric Diggory, Cho Chang (Katie Leung) ends the “Harry Potter” series single. It’s not really her fault, as Diggory is murdered, and her short relationship with Harry ends because of her emotional baggage. Ouch. 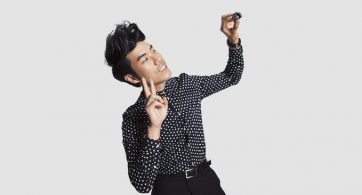 Feeling cute today? Well snap a pic because it’s National Selfie Day. On June 21, the world finally has a valid excuse to use the self-portrait function on their […]