On June 21, the world finally has a valid excuse to use the self-portrait function on their phone. If you’re feeling embarrassed, don’t. Here are nine stunning selfies from some of our favorite people to show that you’re never too cool to take a selfie

Alexander is our favorite ethereal being occupying the physical plane… chill and transcend reality later?

The royal ninja king of our hearts, Lewis Tan of “Into the Badlands” fame, has a huge new role in “Wu Assassins” that we’re anxiously waiting to preview. Hint, hint.

There’s nothing basic about taking a hiking selfie. Even if there is, for your own good, don’t tell Dacascos. Why? Just watch “John Wick: Chapter 3–Parabellum.”

DJ Charlie Yin is putting his own hip spin on the OG Asian grandma outfit.

Even modern day warriors use Snapchat filters. You have nothing to be ashamed of.

Forget about land and trees, Booster is on a boat now!

Wow… dare we say this is the cutest Mother’s Day selfie we’ve ever seen? And if you haven’t already checked out Yang’s recent video, do yourself a favor and watch it. 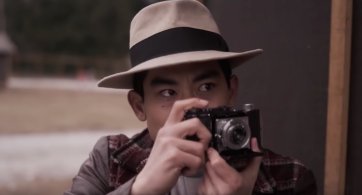 It’s no secret that Japanese internment camps were one of the darkest chapters of American history. But what if some super creepy ghosts got thrown into the mix? “The […]