Steve Aoki, the EDM legend, producer and DJ whose work has influenced dance music globally, is the recipient of Kore Asian Media’s Music Vanguard Award this year at the 15th annual Unforgettable Gala, to be held inside The Beverly Hilton on Dec. 10.

Unforgettable will be live streamed via Facebook Live for the first time this year.

Aoki, whose documentary “I’ll Sleep When I’m Dead” hit Netflix this summer, and who has owned and operated Dim Mak Records for 20 years, is being honored for his creativity and dedication toward music.

Eric Nam, a Korean American singer, actor and television personality who has risen to the top of the K-pop scene, will headline the night’s list of performers, which includes Kina Grannis, a YouTube star who was seen leading “Single By 30” on YouTube Red this year; Chris “Stahyl” Gatdula of the original Jabbawockeez; East West Players, the nation’s longest-running theater of color; and B.I.G, a K-pop boy band.

Unforgettable is presented for the first time by BMW of North America, which will put on display at the event its visionary BMW i8 hybrid-electric sports car, and shuttle all VIP guests in the all-new BMW 7 Series. The gala is also supported by M&L Hong Foundation, Private Internet Access and Pechanga.

Check out highlights from last year’s Unforgettable Gala below: 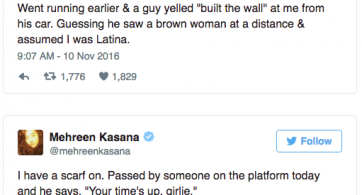 Many members of the Asian Pacific American community are speaking out via social media about instances of racial harassment they experienced after Donald Trump’s election win. Some people are […]