The lutz was named after Alois Lutz, who performed the jump in 1913. It refers to a toepick-assisted jump that starts with an entry from the back outside edge and landing on the opposite foot. It is considered one of the more difficult jumps in the sport because the skater’s body must rotate in the opposite direction of the entry edge, which makes Zhou’s historic lutz even more impressive.

Zhou made his senior debut in 2017 and took gold at the Bavarian Open later that year. Before making it to Pyeongchang, the 17-year-old from San Jose, California, took the bronze medal at the 2018 U.S. Figure Skating Championships. With his quad lutz, Zhou joins Mirai Nagasu, who became the first U.S. woman to land a triple axel at an Olympics, in rewriting the books. 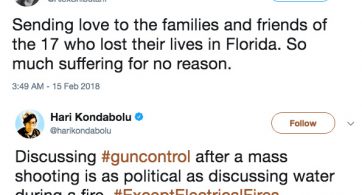 On Wednesday, 17 people were killed at Marjory Stoneman Douglas High School in Parkland, Florida, by a lone gunman. Nineteen-year-old Nikolas Cruz, a former student of the school who […]