What happens when you’re stuck in a room sitting in for people on drugs?

Ask Mitski, because that’s exactly what she does in a new short film titled “SITTING,” which doubles as a sort of music video for her lush and moody romance-driven track “Thursday Girl.”

The short, written and directed by film and TV critic Emily Yoshida, stars the singer-songwriter as she delivers a life-altering drug to clients, and sits with them, as attempt to “meet God.” As Mitski says in the short herself: “It’s quite hard to describe what I do.”

Mitski will next embark on a 2018 tour with Run The Jewels and Lorde for the “North American Dance” tour.

You can watch “SITTING” below: 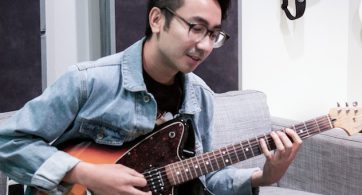 Growing up as an Asian kid in suburban Maryland, all Antonio Cuna would do was skate around and play in rock bands. With an all-black wardrobe that consists of […]