Read the full transcript of Chung’s speech below:

How’s everyone doing? First and foremost, my grandmother who means the world to me — hello halmoni, I love you so much. I wish she could be here. She’s not as mobile as she used to be.

I have to say that since I’m here, I don’t know if he’s been here before, but I’m on the hunt for Jason Scott Lee. Does everyone know who Jason Scott Lee is? I’m from L.A. This is really what we stand for, the value of everyone here who is all about seeing ourselves represented on the big screen and understanding self-reflection. It’s what Cashmere Agency is about, it’s what Stampede is about, it’s what Merry Jane is about. It’s about changing the status quo and seeing ourselves as we really should, as Asian Americans.

I’m from L.A., so when I grew up here, I had friends of all sorts, which meant that I was dating women from all different backgrounds. Latin, white, black, Jewish, everything. I went to school in Philadelphia, and on the East Coast, the protocol was a little bit different. I’d walk into these sorority parties and my whole rhythm would be thrown off. I had no game. I’d walk into the black sorority parties, and my sh-t was just shut down from the get-go, which was not expected from how I grew up. I realized that the issue was, is that a lot of people hadn’t seen — I hadn’t seen — a strong Asian male having sex on screen.

I realized why I had an affinity for a movie called “Dragon: The Bruce Lee Story.” It was Jason Scott Lee and Lauren Holly, and there was real sensuality, real sexuality represented for the first time when I was in high school, and I thought that was really impactful for me. I had it on VHS tape. That kind of dates me.

When I had a date one time with this girl, she wasn’t Asian, I brought her back to my crib at the time, which was a small apartment. I had a joint, I had some wine, and I popped in that “Dragon: The Bruce Lee Story.” After about an hour and half at her being mesmerized at this incredible, attractive Asian man and his ability to kill all the stereotypes that exist about us, I was — it was crackin’, that’s all I gotta say.

Someone in this room knows Jason Scott Lee. So please tell him to holler at me. My email address is Ted at cashmereagency.com. Because I owe a lot to him. That VHS tape has gotten burnt like a hundred times, two hundred times over in multiple decades. I know every word in that film.

All jokes aside, that’s really important to me. Kore Asian Media, London Trust, I want to thank Ted Kim and his wife Kimber, who have been supportive of me from Day 1 when people didn’t really understand what I was doing. I’ve got to thank my mom and dad who are here, who gave me the proclivity and the tenacity to do what I do. I’ve got to shout out to the Cashmere Agency team, which is the most multicultural table in this motherf-cker right now. Stampede team, Merry Jane. We’re all about breaking the norm, we’re all about the new general market, we’re really representing how we live our lives in this room and changing the status quo. If you want to learn about this incredible industry called the cannabis industry, which is federally legal in Canada and in California, in 2018 it’s going federally legal, come and see me. Me, Snoop Dogg, Wiz Khalifa, Seth Rogen, my brother and his beautiful wife, are at the forefront of [it]. Come holler at me over Blue Label. Thank you so much for this. I’ve got to give a big shout out to Jeannie Mai. Jeannie Mai is a real one, and she’s an incredible, beautiful person. Everything she represents is a big part of what we are talking about. Thank you so much, Kore Asian Media. 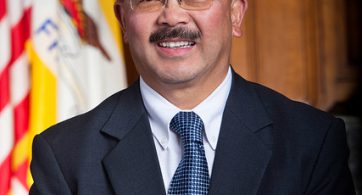 Ed Lee, who served as the first Asian American mayor in the history of San Francisco, died early Tuesday. He was 65. Former mayor Willie Brown reported to the […]