What happens when you combine the forces of one of the world’s most popular electronic house musicians with the glam and choreography of K-pop? The perfect driving song, apparently.

Grammy-nominated EDM artist, music producer and author, Steve Aoki collaborated with dreamy, K-pop super group Monsta X for “Play It Cool.” On March 27, the Aoki-Monsta team released a music video for their hit single which features vibrant visuals that complement the up-beat sound of “Play It Cool.” While the boys of Monsta X dance away the day in their chic hotel room, Aoki executes the same dance moves on a Tesla-powered road trip. Composed, arranged and produced by Aoki, the song marks his fourth collaboration with a K-pop group. The song was released in Korea last month on Monsta X’s “Take.2 We Are Here.” which climbed the World Albums chart to the No. 5 spot. “Play It Cool” is now available in both English and Korean.

Monsta X is set to embark on a world tour in April. Aoki, on the other hand, will be launching his memoir, “BLUE: The Color of Noise” on Sept. 3 and will host “Aoki ‘N Air” from March 21 to April 17, a podcast that focuses on Japanese culture and the DJ’s thoughts on art, food and music. 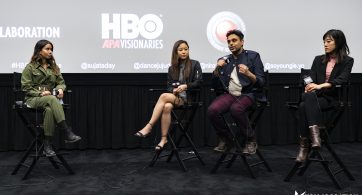