After a panel discussion led by “Insecure” actress Sujata Day and featuring this year’s winners Julie Zhan, So Young Shelly Yo and Nirav Bhakta, the evening concluded with screenings of HBO APA Visionaries alumnus. This year’s competition theme was “Living in the Digital Age Through the Asian American Lens.” Bakhta, Yo and Zhan’s films were selected because their films reflect the modern Asian American experience of living in today’s digital age. The winners’ films will also be screening at this year’s Los Angeles Asian Pacific Film Festival.

Coincidentally, each director approached the task by drawing upon their own personal experiences of growing up with Asian immigrant parents. Yo’s short film “Moon Walk with Me” tells the whimsical story of a young girl coping with her father’s frequent trips to the moon, a narrative inspired by the director’s own childhood experiences growing up with a father who traveled often for work. In “Zoetic,” directed by actress and director Zhan, a daughter asks her mother to join an online dating app and gets herself more involved in her mother’s romantic relationships than she intended. The film is based on Zhan’s own well-intentioned misadventures. Lastly, actor and director Bhakta’s “Halwa” is about an Indian woman who rekindles her relationship with a childhood sweetheart through Facebook, and explores the relationship that older generations have with technology.

“It’s important to tell these stories because they’re our stories,” said Nirav Bhakta. “If we don’t, no one will.” 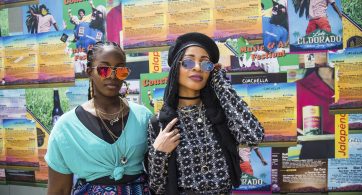