Roy Choi of Kogi, Chego and A-Frame says he’ll be opening new restaurant Sunny Spot on Nov. 18 in Venice in the former Beechwood space — “think roadside cookshop, where every day’s a holiday.”

An ex-member of an elite North Korean special warfare unit defected across the West Sea on Oct. 30. He crossed the sea on a raft made of tires, it emerged on Tuesday.

Under questioning by the National Intelligence Service, the military and police, the man, who is in his early 30s, said he had been discharged from the marine sniper brigade five years ago and then worked as a civilian member in a military unit.

Last week, we watched Das Racist drag their parents to Bumbershoot. Today, to herald the release of Margaret Cho’s stand-up concert film, Cho Dependent — and say farewell to SPIN’s first-ever “Funny” Issue — we have footage of the comic and friend-of-indie-rockers everywhere bugging the shit out of everyone backstage at the 2010 Bonnaroo festival to the sounds of her “Baby I’m With the Band” (featuring Brendan Benson). Watch carefully to see who embraces the Cho, and who eyes her warily (the list of guest stars includes Conan O’Brien, Reggie Watts, Doug Benson, The Flaming Lips, Weezer, OK Go, the Gossip, The Punch Brothers, and GWAR).

Hines Ward did not start in Cincinnati, and he played a limited number of snaps in the Steelers’ 24-17 win over the Bengals. If the Steelers’ all-time leading receiver has been demoted he is taking it in stride.

“It’s not about me, it’s about the team,” Ward said. “We won the game that’s the bottom line.”

Ward said his health wasn’t an issue, and that the coaches didn’t tell him before the Bengals game that his playing time would be diminished.

The normally closed, secretive country is trying to open its doors a crack to foreign tourists, particularly from China, as a way of earning hard currency.

[In the photo above,] Chinese tourists converge on the house where the late Kim Il Sung, North Korea’s “Great Leader,” was said to be born.

Anthony Kim has endured plenty of lows over the past 12 months, but feels he’s now on course to hit new highs.

During the LA premiere of The Language Archive at East West Players, the scent of warm bread wafted through the theater. There’s nuance to smells, I’m told, a layering that is discernible to even the most indiscriminate noses. The same could be said of language and of theatrical plays that go beyond just the black and white categorization of “good” and “bad.”

As with my nose, there’s a certain level of layering that I’m oblivious and, like the bread smell, there was something comfortable and familiar with the The Language Archive. I spent the evening trying to figure out where I’ve seen this story before.

Cho and Wilhoite were the only two golfers to shoot under par in the tournament. Both were 1-under, 71, after 18 holes.

Angry fans called Wednesday for the resignation of coach Cho Kwang-Rae after South Korea suffered a stunning 1-2 defeat to underdogs Lebanon in the third round of regional World Cup qualification.

The official website of the Korea Football Association (KFA) was flooded with critical postings, with one suggesting a petition campaign to press the KFA to dismiss Cho.

For many filmmakers, the festival serves as an opportunity to create change in the industry through gaining exposure and connecting with people.

“Support from groups like this has been invaluable in helping further my career,” said Mina T. Son, a Korean American filmmaker who screened her short, “Making Noise in Silence,” at the festival. The the short follows the lives of two Korean-American students at the California School for the Deaf. Son returned to the festival to receive an award for Best Short Documentary for the second year in a row.

The Eisner and Harvey-winning cartoonist behind such works as Same Difference and Other Stories, The Eternal Smile (with Gene Luen Yang) and Good As Lily (with Jesse Hamm), Derek Kirk Kim has completed the first season of his live-action Web series Mythomania. Written and directed by Kim, the show follows aspiring cartoonist Andy Go as he navigates the joys, challenges, sacrifices, screw-overs and other assorted indignities suffered by those who seek their fortunes in the comic book book business. The show is an honest and personal (perhaps too personal, in the case of episode seven) into what life can be like for cartoonists, and how easy it can be to face not only rejection but also opportunity.

There’s a new addition to the diverse and colorful ranks of South Korean protesters: a woman who is a serial head-smacker.

The 62-year-old woman has only been publicly identified by her last name, Park. She has been going around for the past few months hitting left-wing politicians on the head.

On Tuesday, she walked into an event in a subway station where Seoul’s new mayor, Park Won-soon, was speaking, got right up behind him, then hit him on the head and called him a “communist.” 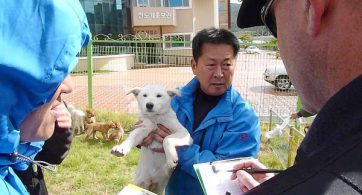 The Los Angeles Police Department pulled the plug on a months-long project to train two Jindo dogs from South Korea to add to their K-9 unit, according to the […]