There’s beauty to be found in a freshly tilled field, with its neat rows of seedlings sprouting from mounds of dirt. But what does a farmed field and a work of art have in common? A lot actually. Both are acts of creation nurtured in just the right context.

California is usually thought of as the home of Hollywood or Silicon Valley, but the state is also known as America’s breadbasket, and many of the folks working them there fruitful hills have been Asian American. The ladies at the Asian American Women Artist Association are working to keep the history of Asian American farming alive through a multimedia exhibit titled “Agrarianaa.”

Running concurrently in San Francisco (through May 23) and San Jose (through Oct. 13), the exhibition features the work of 25 artists who have roots in agriculture, and is co-curated by Michelle Lee, Diana Li and Erina Alejo. The artists’ pieces examine everything from the pains of being a migrant laborer to Japanese internment camps and the importance of environmental activism. Upon returning to the lush countryside surrounding San Francisco after living in Los Angeles for a few years, Lee found her mission. “It’s really important to me to document the history and interconnectedness between Asian Americans and the land in the West,” Lee says. “I hope that people walk away feeling the legacy of Asian Americans in farming.”

Li’s parents were both born in Peru and grew up in the countryside. Her mother recalls being chased by a bull as a young girl. Although Li never encountered tauric dangers during her own childhood in the U.S., the exhibition made her reexamine her connection to the food that she ate. She hopes visitors will feel the same way after coming to the exhibit. “One of the farmers had written, ‘I don’t grow plants, plants grow,’” Li says. “It got me so excited—how we’re not the creators of everything. There’s an entire ecosystem of things that need to happen in order for a seed to sprout and grow, which is similar to community building through curating.”

The curators of “Agrarianaa” are also cultivating contributing artist Reiko Fujii, who spent her childhood summers on her grandparents’ 6-and-a-half-acre chicken farm in Riverside. Her grandfather was a “Renaissance man” who knew everything about cars to farming. He built the barn and egg houses on their property. Fujii had an especially close relationship with her grandmother. Although they didn’t share a mutual language, they were “able to communicate through body language and laughter.” For the show, Fujii submitted a literal piece of her childhood: a section of the wall from an egg house she used to play in as a child. “I found out the farm was going to be sold back in 2000,” Fujii says. “That egg house had a lot of memories for me. I remember [my grandmother] waking up every morning before dawn to go out in the fields. The reason why I loved the wall so much is because my relatives who lived there would write telephone numbers and names in chalk on the wall. If they were going to call somebody, they would look up on the wall and the name and phone number would be there. My grandmother did most of the writing.”

As a sansei and San Francisco-grown artist, Lucien Kubo likes to blur the line between myth and history. For her piece, Kubo was inspired by the staple grain that has an almost holy status in Asian communities: rice. Kubo’s artwork is a tribute to both Inari Ōkami, the Japanese goddess of rice, and California’s oldest continuously family-owned and operated rice farm and mill, Koda Farms. “I remember the various, colorful rice sacks when I was growing up,” Kubo says. “I was trying to bring in those nostalgic feelings with the rice sacks, but also make it very kind of down to earth. The goddess of rice comes up a lot in agriculture and industry, so it’s a tribute to her. And, of course, rice is a real staple of the Japanese diet in Japan and the United States, as well as for many of the Asian Pacific cultures. I like to make things that look friendly and fun-looking, but are also relatable to people’s experience.”

Since the act of farming is a labor intensive process, some pieces at “Agrarianaa” are interactive. For Filipino artist France (who prefers to go just by her last name), both art and food are deeply emotional mediums. After moving to the U.S. from the Philippines, France found that one of the only ways to connect with her home was through food, so many of her pieces involve edible elements. In a tongue-in-cheek representation of her mixed Texan-Filipino heritage, France will be displaying a halo-halo sandwich: the sticky dessert spread between two slices of Texan Wonder Bread.

In another piece that she made for the exhibit, France was inspired by a seminal event in Filipino history, the Delano Grape Strike. Her piece invites visitors to run their hands through the dirt that she gathered from grape farms in Delano. “I believe soil can hold vibrations, aspirations, and I want them to feel that,” France says. “I smeared the grape crate with Three Flowers Brilliantine pomade because that’s what manongs used when they danced all night in the dance halls. And I saw pictures of them, and they were very handsome, with all the pomade, and boots. You always think of farmers as dirty, in their rags, and that wasn’t the case. What motivates me are stories; I always start with a story, and my artwork also ends up with a story.”

All the artists at “Agrarianaa” say they’re motivated to create for reasons beyond their control. They simply have to make art by nature of being an artist. “When I first started doing art, I wasn’t really sure what I was doing, but I just liked the creative process,” Kubo says. “I began to see that it was a way of presenting my own voice and perspective, and so that’s why I create art. Because it is a way of expressing … one’s own perspective, history, culture, family stories and that of the broader community.” 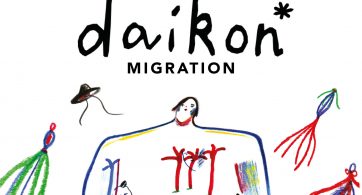 Looking for a way to unwind after finals or a day at work? It might be easy to dismiss zines as kitschy, but flipping through one is like reading […]