“Aloha!” Bretman Rock bubbles excitedly as he apologizes for his lateness and explains that his car broke down three times today already. His animated speech is lightly tinged with his signature Filipino lilt. “Yeah, girl. It’s been a long, f*cking day,” Rock says, with a sigh. “I had to ask my cousin to jumpstart my car, like, three times. So, that was my morning.”

For those under the age of 30, Rock needs no introduction. But for those who aren’t millennials or a part of Generation X, here’s all you need to know: Rock is “Da Baddest.” At just 21 years old, he’s sitting pretty at the seat of a social media empire. He’s well-known for his outrageous and hilarious videos, where he offers commentary on his day-to-day life over mukbangs, gives makeup tips and often spills his thoughts on relationships and his family dramas, among other things. He first began posting videos on Snapchat when he was just a freshman in high school, and later started crossposting his content to Instagram at his friends’ behest. What began as a way to entertain his friends has launched Rock into a career of fame and fortune. Currently, he has 13.7 million Instagram followers, 3.88 million on Twitter and 6.66 million YouTube subscribers. He attributes his success to his unabashed honesty. “I am the voice that lives in your head that has no filter,” Rock says. “I’m like everyone’s alter ego. I say things that most people would never say, and do things that they would never do. You know what I mean?”

At the time of interview, Rock had just gotten back from his first New York Fashion Week. There, he showed off a few outfits (including the one he’s rocking for this story) while wearing some killer lashes. His few days in N.Y.C. gave him an opportunity to bump elbows with celebrities who made their claim to fame through more traditional means, like Victoria’s Secret model Adriana Lima. Even though she’s been following him since he was in high school, he was too shy to approach her. It’s a surprising thing to hear from a performer who’s built a personal brand on being brash and brave. “She’s so pretty,” Rock says. “I wish I got to meet her, but I was scared. Honestly, only Adriana Lima could make me shake in my boots.”

Beauty is not just something that he pursued at fashion week. It’s a quality that Rock has striven to achieve since the early days of his videos. He prides himself on his flawless skin and bushy, yet well-groomed brows. He has a decidedly “fishy” look about him. But Rock had his blunder years. “Everyone has a glow-up period,” Rock says. “But back then [in middle school], even when I was ugly, I was already feeling myself and no one could tell me sh*t. I mean I’ve always been ‘Bretman Rock,’ but I kind of grew into him, too.”

It might seem strange for Rock to be speaking in the third person, but the performer makes it a point to distinguish between his stage persona and his real-life self. He attributes a large part of his personality from his childhood growing up in the Philippines, and dealing with his parents’ rocky marriage. “I guess I get my personality from the sh*t I’ve gone through,” Rock says. “It’s derived from things that I saw growing up, like my dad f*cking the maid. Those are the images that I grew up seeing… My personality comes from hiding, to be honest with you. And I just took that and ran with it. Over time it became me, it became a part of me. And it became Bretman Rock. As much as I am Bretman Rock, there is a fine line between Bretman and Bretman Rock.”

One thing that is sure, though, is that Rock is proud of where he comes from and who he is—it’s made him stronger. Take his makeup projects, for example. In addition to his more traditional, boyish, yet feminine looks that he creates, Rock also dabbles in drag. He hasn’t been a lifelong performer and has only taken up the craft in the last few years. The first drag persona that he crafted was “Hoera the Explorer,” a parody of “Dora the Explorer.” “One of his most recent outfits paid homage to the Filipina superheroine, Darna. Rock says he’s always lived in awe of Filipina beauty. “I’ve always appreciated my culture and where I come from,” Rock says. “I’ve grown up with women my whole life. I was raised by a single mom. Sometimes my aunties would take care of me because my dad was kind of out and about, cheating and sh*t. They really shaped my views on womanhood, how a woman should be and how a woman should be treated. The Filipina woman has always been my muse.”

In fact, Rock attributes the moment that he first fell in love with makeup to a Filipina woman near and dear to his heart: his grandmother. Before he moved to the U.S. and after his parents’ separation, Rock lived in Kabayan with his father until he was 9 years old. He ended up spending a lot of time at his grandmother’s house. “When I was still in the Philippines with my dad, I would always watch my grandma get ready for church,” Rock says. “I would sit on her bed and watch her do her makeup. She would put on blush, lipstick, powder, and she’d let me put on her perfume. That’s when I fell in love with woman, vanity, being petty and the whole art of getting ready. I’ve always admired the feminine and the art of improving your confidence, like how my grandma felt about just a touch of lipstick.”

Considering the online personality Rock has cultivated, it might be surprising to learn that he hasn’t always been so, well, feminine. Take the name “Bretman Rock” (which is actually his full first name), for example. His father named him after two of his favorite pro-wrestlers: Bret “The Hitman” Hart and Dwayne “The Rock” Johnson. While he was growing up, his parents actively encouraged him to pursue sports during his time in school. “My dad wanted me to be a f*cking bro,” Rock says. “Honestly, it was both my mom and dad. They wanted me to do sports, so I did it to make them happy, but I actually love doing sports. I have really bad anxiety and ADHD, so, it was always an outlet for me growing up, to put my energy off somewhere and to tire my brain.”

The transition from playing soccer and football to playing with the eyeshadows in a makeup palette might seem like an odd switch, but for Rock it felt natural. It was just another way to cope with his ADHD. “When you’re doing makeup, it’s just you with makeup and the brushes,” Rock says. “You can literally do anything that you want. You can be anything that you want with makeup. It just comes off. Makeup makes me feel like anything and everything is temporary. It’s a way for me to escape.”

Although his makeup skills and firecracker personality are the engines behind his success, Rock’s online presence is hardly a one-man show. In his videos, he makes it a point to feature his sister Princess, and Cleo, his adorable niece. He describes his relationship with his sister as one with “a lot of love and a lot of hate.” But Rock includes her as much as he can. He feels like he owes it to her. “When you watch our videos you kind of get this feeling like, ‘Whoa, he’s mean to his sister,’ but not really,” Rocks says. “That’s just how my sister and I grew up. She’s my best friend. I see so much in her, and I want to see her succeed with me. I genuinely owe her a lot, and she knows that. I just try to share as much of my blessings with my family. I owe them the world.”

Although he does tend to border on oversharing, there are some things that Rock keeps to himself, namely, his love life. “I’m in my first ever relationship,” he says. “We just recently moved in together, but obviously I don’t talk about that. My love life is something that I want to take care of, cherish and keep to myself. People are being respectful of how private I want to be, and it just lets them focus on Bretman Rock, and that’s how I’ve always been. Because Bretman Rock is a ho. If they see a boy tied to me, then Bretman loses his magic. I won’t get to talk about getting my @ss ate every day anymore. I’m not going to be making mukbangs with him, I’m not going to be making ‘My Boyfriend Does My Makeup’ videos. That’s for my eyes only and for my holes only, girl.”

But Rock is more than just an online personality. His fame is indicative of a shift in popular culture. We’re firmly in a new era of entertainment, where being a celebrity doesn’t necessarily mean being on a TV show or film. For Tubefilter founder Joshua Cohen, this is old news. With his news platform, Cohen regularly reports on fresh developments on influencers and everything related to digital media. To him, he sees Rock, and other influencers like him, as an answer to the diversity conundrum that Hollywood has wrestled with for the last few years. “In Hollywood there’s only so much representation they can fit in the studio movie releases or cable television shows, but online, you just need a cellphone and an internet connection,” Cohen says. “These vast numbers of voices get to be projected out into the world. All these fans pick up on that and find someone that they might not have connected with before, like, ‘This person looks like me, or talks like me,’ or ‘This person is my religion,’ or has the same sexual orientation or gender identity. That’s something that’s compelling, and that you don’t really get in Hollywood.”

To Cohen, the secret to Rock’s fame is a quality that can’t be quite explained. Rock just has it. “Some people are just able to come up with creative content ideas that don’t seem pandering, they seem genuine,” Cohen says. “He seemingly loves what he does and his audience. He really likes to maintain a strong connection with them that’s honest and authentic, and he honors that.”

But for Rock, the fame isn’t everything. He hopes that others like him aspiring to break into influencer circles do it purely for the love of the craft. “You can’t really touch, feel or measure fame. Fame is not real,” Rock says. Suddenly he pauses, and the sounds of a bus and a large crowd briefly overwhelm the connection. “Oh my gosh, speaking of fame—that’s so funny, I’m literally next to a bus stop and I was just talking about how fame isn’t real, with kids screaming my name. But to be honest, if I had, like, 12 followers I would still be doing what I’m doing today, because I do what I love. Don’t ever do it because you want to be famous. Do it for you and because you love to make people smile.” 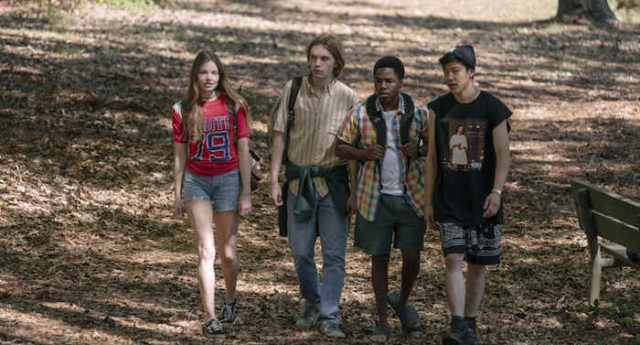 Remember your secret addiction to “Dawson’s Creek,” where you felt shame watching each increasingly goofy episode, but couldn’t stop? Or maybe that was just me? Well, for all you […]