It happened! A pilot that I worked on got picked up to be a series!

Now, I’ve done several of these during the course of my career, and none have made it past the pilot stage. But after over a decade of hard work in this business, it’s finally happened. I will be a regular character on a nationally televised show. But this is not just any show. When it makes its debut next year, ABC’s Fresh Off The Boat will be the first Asian American family sitcom to air on network television in 20 years, since Margaret Cho’s All-American Girl. For me, coming from an Asian American studies background, this is like a wet dream. But it’s also a lot of pressure.

People are hungry to see themselves represented on television, and people rightfully want to be represented properly. But the Asian American community is not monolithic, and proper representation means different things to different people. For example, there has been a great deal of online debate about whether or not the title Fresh Off The Boat is offensive. The answer isn’t so clear-cut: it’s yes for some, no for others. Again, members of our community do not all think alike. But with that said, this particular show is based on an amazing book bearing the same title by Eddie Huang. It is his memoir, it is his title, and I, for one, am all for it.

I do, however, have my own issues with the show: first of all, the fact that I’m on it. To have a Korean American actor play the father of a Taiwanese-Chinese American family is an issue that is not lost on me. I’ve even expressed my concerns repeatedly about this to Eddie himself. And every time, he has shown me nothing but love and support, assuring me that I’m the only one for this job. Whether true or not, I take that to heart because, again, it is his story.

Then, there’s the issue of having to speak with an accent. In an ideal world, I would never have to play a character with an accent. But this is a character based on a real person. So it’s something that I have to honor and try to perfect as the series moves forward.

Playing an immigrant character on a television comedy also has its own inherent risks: Is the audience laughing because the joke is funny or because I’m speaking with an accent? Are they laughing because I’m a human being in a funny situation or because they think I’m a funny-talking immigrant? I am constantly analyzing through this lens, almost to the point of paranoia.

Geesh, white actors never have to go through this sh-t.

But issues aside, I am proud to be a part of this amazing show. Getting a television series on the air is an incredible feat. Getting one with no bankable name stars in today’s television climate is damn near impossible. Getting one about an Asian American family on the air is a frickin’ miracle. Just know that. And regardless of how Fresh Off the Boat does ratings-wise, I believe it’s a step toward more varied representation on the small and big screens. Hopefully, it inspires others to tell their own stories and translate them to a TV show, as Eddie did. It is possible. And we shouldn’t have to wait another 20 years for it to happen again. 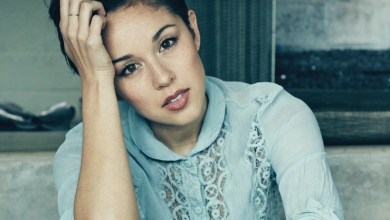 Story by Ada Tseng. It’s been half a decade since Kina Grannis began writing her 2010 debut album Stairwells, which featured songs that were practiced, appropriately, in the stairwells […]