It’s been half a decade since Kina Grannis began writing her 2010 debut album Stairwells, which featured songs that were practiced, appropriately, in the stairwells of the University of Southern California, where she attended college. Now 28, she’s gone through much personal growth, spurred by everything from the tragedy of her grandfather’s passing to the joy of a new marriage to her frequent musical collaborator, Jesse Epstein. These life experiences gave her the courage to write songs about topics she may have shied away from in the past. She also began working with producer Matt Hales (also known as Aqualung) to experiment with her music sonically.

In the days leading up to her new album release this past May, Grannis uploaded a series of “Making the Album” videos onto her YouTube page, where she let her large and supportive online fan base glimpse behind the scenes, from Hales’ unique instruments (the glockenspiel is featured on the track “This Far”) to her pet corn snakes, Hubert Cumberdale and Jeremy Fisher, who often joined them in the studio. Now that the album’s out, we follow up with the Japanese American hapa.

Audrey Magazine: Why the title Elements?

Kina Grannis: I was looking over the titles [of my songs] one day – “The Fire,” “Dear River,” “Write it in the Sky,” etc. – and the word “elements” came to mind. The idea of the basic elements of life really struck me. To me, that’s what this album is all about: family, love and loss. Beginnings and endings, past and future.

AM: You wrote a lot of the songs in a cabin in the woods. Have you secluded yourself in nature to write before, or was this a new experiment?

KG: I’d actually never done this in the past. A sophomore album is an interesting thing. For the first album – in my case, Stairwells – you basically have your pick from all the songs you’ve written in your life, up to that point. And before Stairwells, I had all the time in the world to be writing. Since then, however, I’ve been touring and posting videos almost nonstop, so by the time I needed to start working on the new album, I had very few songs to start from. I started doing these retreats as a way to get out of my normal routine, connect to myself and nature, and really give myself a safe place to start flexing those creative muscles again. Thankfully, it ended up being a really natural and inspiring way for me to get back to writing.

AM: Can you talk about what inspired the song “Winter,” about the impending ending of a relationship?

KG: Strangely enough, “Winter” was inspired by a vase of dead flowers. I found them in one of the cabins I stayed in, and they were so beautiful, but there was something really sad about them to me. Soon enough, I found myself singing the chorus. This song really hit me hard emotionally when I was writing it – when I realized I wasn’t singing about the flowers at all.

AM: The song “My Own” features your two sisters. What was it like growing up with musical siblings, and how did that collaboration come about?

KG: My parents had a lot of instruments in the house [when we were] growing up. We had a grand piano, and under it, there were about 15 different assorted instruments, from violins to recorders to an accordion to a Japanese koto. Most of them didn’t really get touched by us, but just having them around led me to really experiment with music as a kid. My sisters and I used to sing together all the time – usually Disney songs, Christmas carols or whatever our favorite albums were. “My Own” came about one day when I was thinking about my family – how they are so unique and amazing and entirely mine.

AM: Looking back, was there a moment when you realized music was something you wanted to pursue more seriously?

KG: Before I even started taking singing seriously, and before it ever occurred to me to touch a guitar, I had that moment. I was at an annual Christmas concert when I was about 15. Something struck me so deeply, watching all these people standing in front of us and singing their hearts out, that I basically ran out of the concert balling. I hid in the bathroom for the rest of the night trying to figure out what was wrong, and that’s when it hit me. I felt if I didn’t make singing a main focus in my life, that I was going to be missing out on who I was.

AM: By the way, we love your new look! Was this just a fun change, or does it feel like the start of a different phase in your life?

KG: It definitely coincided with a new chapter in my life. I had been touring around, living a Stairwells-driven life for the better part of three years. When I got home after the last tour, it just felt different. There were also a lot of other significant changes going on in my life at the time. I felt the need to start this chapter fresh and uninhibited, and that’s when I said goodbye to 19 inches of hair.

This story was originally published in our Summer 2014 issue. Get your copy here. 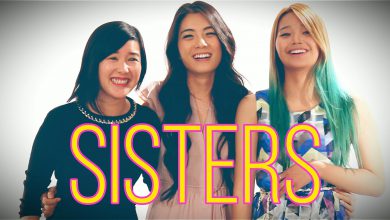 They say that the bond between sisters is a bond like no other. Sure, sisters can be a headache and they can argue way too much, but when you […]