Open up the cheerful orange packaging of a Bokksu box, and a variety of treats spills out: pillowy mochi, rum raisin Kit Kats and peppery senbei rice crackers. Sampling these munchies might take a lucky snacker to the fields of Hokkaido with a sip of warm Hojicha green tea, or to a Japanese fireworks festival with the taste of Daimonji’s fizzy ramune candy.

Although the Japanese snack subscription service offers a wide variety of treats, the ramune candies, as well as Hiroshima matcha milk beans, white chocolate-infused strawberries and many more are Bokksu exclusives. Bokksu was created through the many partnerships that CEO and founder Danny Taing formed during extensive trips to Japan. While it’s not the only Japanese snack subscription on the market, the company’s focus on artisanally crafted snacks and treats sets Bokksu apart from its competitors. Taing and his crew make a point to work with local family-owned businesses to help curate monthly, themed offerings (which are also available for individual purchase in the online market).

Back when Taing founded the company in 2016, Bokksu offerings were brought to the States via  his suitcase. Times have since changed. “We now curate boxes at least six months in advance, and the themes have been planned all the way into next year,” Taing says from Bokksu’s headquarters in New York. “We keep it authentic, because Japanese people eat very seasonally. For them, fall is for persimmon, winter is for mochi, and so on—as opposed to Americans, because for us, we want our blackberries and strawberries all year round.”

Each box comes with a guide that tells the story of the maker behind each snack, and explains how to eat it. That part is crucial, because some of Bokksu’s more obscure snacks are an acquired taste. “People want to learn more about Japan and about the products that they’re eating, because for the most part they’ve never seen any of these products, and they can’t read the Japanese packaging,” says Taing. “We have this really good understanding of Western taste practices now. There’s always a fine balance between what’s really traditional, and what sells and doesn’t sell.”

Red bean, for instance, is a tough sell “unless it’s coated in chocolate or matcha” (another popular treat). But though the snacks might be unfamiliar to Western tastebuds, you won’t find any product descriptions that capitalize on the so-called “exotic” nature of Bokksu’s offerings. It’s all a part of the cultural sustainability movement that drives the company. “We always keep that in mind, the way we portray not only our makers, but also our products, and ourselves,” says Taing. “We never use the words exotic, or whacky, or weird in any of our advertising or marketing materials describing our products, and that’s something that we try to stay true to, so it’s not sensationalized.”

As Bokksu continues to grow, Taing is planning to create a web-series documentary chronicling one of the company’s trips to Japan. With Asian American fashion director Bon Duke at the helm, the series will show the process of creating and selecting the snacks that make up each Bokksu.

And, of course, there’s the upcoming September box. Themed around Japan’s moon festival, the package includes usagi chocolate balls and a variety of fresh teas and cheese cakes, wrapped in a specially decorated box inspired by Otsukimi paintings. You can pre-order yours here. 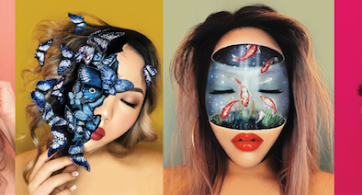 As the clock strikes 3 a.m., a four-eyed woman with a spliced face, flawless brows and faux lashes is painting away in the mirror while the city sleeps. Mimi […]