After “Crazy Rich Asians,” it might be hard to think of other blockbusters where you can see Asian Americans take the spotlight. Luckily, this summer is bringing us plenty more movies that feature API actors and characters.

There’s nothing better than settling in for the night and curling up on the couch with a movie and some snacks. Or is there? Switch up your movie streaming routine and head to the theater to check out these eight flicks, premiering throughout the summer.

In this dramedy, Molly Patel (Mindy Kaling) is hired as the token female, person of color in an all-male writers’ room at a late-night talk show, hosted by TV veteran, Katherine Newbury (Emma Thompson). Molly, an eager newbie with a dream, is determined to prove herself and revive the show by revamping its content through smart, relevant sketches and comedy to connect with a wider audience. With an original screenplay written by Mindy Kaling, we’re sure “Late Night” won’t be short on laughs.

The original band of toys are back for a fourth adventure… road trip edition! Join Sheriff Woody, Buzz Lightyear, Jesse and the gang as they tackle the antics of Bonnie’s new trouble-making toy, Forky. We are beyond excited to see Maki voice the tiny, but powerful sidekick, Giggle McDimples. Plus, Keanu Reeves voices the self-conscious plastic stuntman, Duke Caboom.

What would you do if you were the only person in the world who remembered The Beatles’ legendary existence? That’s exactly the situation Jack Malick (Himesh Patel), a struggling singer-songwriter from a small English town, faces after waking up from an inexplicable global blackout. Be prepared to have The Beatles on repeat during the car ride home.

In the wake of “Avengers: Endgame,” we follow our boy Peter Parker as he travels abroad with his best friend Ned (Jacob Batalon) on a school trip to Europe. Unfortunately, Spider-Man has little time to mourn the loss of Tony Stark after being recruited by Nick Fury and Mysterio. And it wouldn’t be a film about high school students without a little romantic drama. In this Spider-Man flick, Peter’s classmate Brad Davis (Remi Hii) is also competing for MJ’s affections.

You’ll probably need to grab a box of tissues for this one. In this dark comedy based on director Lulu Wang’s life experiences, Awkwafina plays her first cinematic lead role as Billi, a young Chinese American woman participating in an elaborate family charade to hide her grandmother’s terminal lung cancer diagnosis from the matriarch herself. It’s a hilarious, but poignant portrait of Chinese American values.

Known as “Wild Speed: Super Combo” in Japan, this spin-off of “The Fast and Furious” franchise is the ultimate vehicular summer blockbuster. Faced with the threat of a genetically-advanced international terrorist group, DSS federal agent Luke Hobbs (Dwayne Johnson) and SAS operative-turned-mercenary Deckard Shaw (Jason Statham) form the perfect team of enemies to get the job done.

Based on the memoir by Bruce Springsteen superfan Sarfraz Manzoor, this movie sees Pakistani teen Javed struggling to break free from the confines of his parents’ traditional expectations through the music of “The Boss” himself. As Javed’s love for Springsteen grows, so does his voice as a writer, launching him out of his tiny hometown and into the great big world.

You’ve seen her as Shayna in “The Comeback” with Lisa Kudrow, but watch rising star Zoe Chao play Soo-Lin, the antagonist at the center of a backstabbing scandal, in the film adaptation of Maria Semple’s comedy mystery novel. “Where’d You Go, Bernadette” will make you laugh out loud, while stringing you along on a quest to find stay-at-home mother and former architect, Bernadette Fox (Cate Blanchett), who goes missing after a family trip to Antarctica. 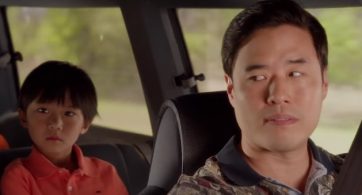 Happy Father’s Day from all of us at Character Media! We can’t buy a stylish watch or tie for the Asian TV dads that helped raise us. Although these […]