As the curtain cloaking the stage lifts and the sound of chopping helicopter blades breaks the silence of the theater, lights shine upon a horde of scantily clad Vietnamese prostitutes. They jeer, laugh and thrust their hips at Kim, the virginal new girl, in a dizzying whirlwind of sexual depravity. In the audience, a wide-eyed, 9-year-old Li Jun Li watches the graphic opening scene of “Miss Saigon,” traumatized. She swears she will never become an actress.

But only 10 years later, Li landed her “first real job for a 19-year-old” in that very same musical, which catapulted her career. A dozen theater roles later, she eventually found her way to television, playing recurring roles like social worker Rose Cooper in “The Exorcist” and cocky FBI agent Iris Chang in “Quantico.” In August, the 35-year-old will appear on Netflix’s martial arts drama Wu Assassins, as confident restaurateur Jenny Wah. But Li dutifully refrains from describing how the culinary world and martial arts will blend in the show because “you’ll enjoy it more if I don’t say anything.”

Li is excited about the diversity of both the cast and crew on the show: of the 10 members on the creative team, six are Chinese, and four are women. Just like her character, she’s also Chinese American and relates to Wah’s struggle between Western and Eastern culture. When Li was 6, she left her birthplace of Shanghai, China, to follow her dad to Bogotá, Colombia, for his job. “I had to learn Spanish, and as soon as I became fluent, I had to move again to New York,” she says. “It’s confusing because you come [to new places] with the Chinese traditions you’re used to.”

Moving so much as a kid was exhausting, but in New York City, Li developed a deep love for the arts. There, she discovered her first passion: dance. When she wanted to take her career to the next level, she received pushback from her father, a painter. He wanted her to pursue visual arts. “When it was time to audition for high school [at Fiorello H. LaGuardia High School of Music & Art and Performing Arts], I auditioned for both dance and art, and I ended up getting into both,” Li says. “The biggest argument between my father and I was actually not about me becoming any of your stereotypical careers, like a doctor or a lawyer. But he really wanted me to go to LaGuardia as an art major, which I did not want. So, I ended up dancing half a day every day for four years. It was amazing.”

She stumbled upon a new love when she auditioned for LaGuardia’s annual open-major musical theater production. Those first roles inspired her to pursue an acting career, which she steamrolled toward without looking back. She took classes at Purchase College’s Conservatory of Theatre Arts, attended open calls, tended bar and paid for New York rent by working as a real estate agent at the same time. “It was not as stressful and awful as it sounds today,” she says brightly. “I accepted that that’s just what you do when you’re 19 years old. I learned so much, and I don’t regret that for one second.”

In addition to “Wu Assassins,” Li will be breaking into film soon. In the upcoming indie comedy “Modern Persuasion,” she will play Rebecca Duvalier, a “self-righteous, arrogant, hot-and-cold, can-turn-on-a-dime” public relations employee. “I actually love doing comedy. I don’t get that opportunity very often; I’m mostly seen for drama. I don’t know if it’s because of my face—I look very serious,” Li says, laughing. “But I really find so much fulfillment when I get the opportunity to do comedy.” There are still some places she’s too shy to go—she is not touching stand-up any time soon. “That’s brave,” she says, in a fearful tone. But just as Li swore she would never be an actress, there’s always potential for a change of heart. 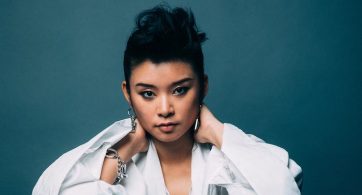 On opening night of the Los Angeles Asian Pacific Film Festival, one slim figure towered above many of her fellow actors and filmmakers on the yellow carpet—Chinese American actress, […]