After all the attention yesterday’s post on Im Jee Young (aka the girl in the sheer hanbok) got, we decided we had to do a post reflecting on all the “World Cup Girls” of years past.

The 2002 World Cup brought an explosion of South Korea fanaticism, and from the massive cheering crowds in Korea came Shim Mina, clad in a cut up T-shirt (bandanna?)  and a Korea flag. Shim Mina was immediately signed to an agency and put out a song 전화받어 (“Answer the Phone”), but after the World Cup ended…so did Shim Mina’s career.

Dubbed the Elf Girl because of her….”elf-like appearance,” Han Jang Hee was a random fan who gained instant fame after having this shot taken of her. She tried to avoid celebrity for the next two years by studying abroad, but eventually signed with an agency and debuted with another girl in a duo called “Foxy.” Her company pushed the duo’s “sexy image” but Foxy folded after only a few months, when Han Jang Hee sent a termination notice to her company through her lawyer and subsequently disappeared. Like an elf.

After the success infamy that the previous World Cup girls garnered, companies have been using the 2010 World Cup as their very own marketing arena. Song  Si Yeon was picked by online game enterprise “Free Style” as their “Neva Lose Girl,”and had her photos shot and uploaded by gaming websites.

Koream’s favorite World Cup girl, Im Jee Young, actually made her first “appearance” in the 2006 World Cup, when she wore shorts with the bottoms cut out and replaced with vinyl. It’s apparently how she gained the moniker “똥습녀” which actually literally translates into “poo daughter,”  giving the photo on the right so much more meaning.

Who says Koreans are conservative? 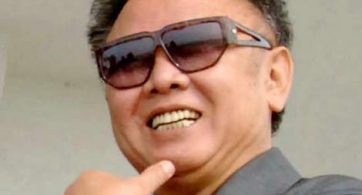 (We would have put up a picture of the phone, but you wouldn’t have been able to see it.) Apparently the North Korean coach, Kim Jong Hun is not […]