“First World Problems” is a dark comedy with a pulse on the current state of society and technology-shaped culture.

Directed by X. Dean Lim, the pilot episode, which premiered at SXSW, features snappy repartee as a father (Stephen Park) propositions his son (Brandon Soohoo) to challenge himself out of the complacent comfort zone of today’s zeitgeist. It’s the story of you and me and this current culture in which we live; the lead characters just happen to be Asian American. Other leading cast includes Tamlyn Tomita and Nikki Soohoo.

How did the pilot for “First World Problems” come to life?

I took a trip to rural parts of Asia to visit different family members, and someone had given me a gift before I left, a pair of $180 Ugg flip flops. I was walking around with these really nice wonderful people, and I thought, ‘My God, I’m really quite a douchebag.’ So it created a bit of soul searching.

When you first wrote the script, how did you envision it?

Steve Park [who plays the father character] is incredibly funny, just a naturally funny guy. I think the best part people really see is his dramatic chops. He’s a fantastic actor. Brandon [Soohoo] came on relatively early. When he came on, I thought, ‘Great, I just gotta find the father [character],’ and it really came together. They had great chemistry.

You don’t actually know, because you end up meeting the grandparents at some point, and it’s still a typical American story, too. A lot of people are still first- or second-generation, no matter what your ethnicity is. I wanted to make it a typical American experience; I think our humor is just the same as everyone else’s.

The interaction between Oliver [Soohoo] and his father [Park] made me think, ‘This is definitely not first generation,’ whereas the second generation can feel burdened by the prior generation’s immigration and struggle.

My grandparents fought a world war. My parents’ generation did everything, they did the sexual revolution, cultural revolution, civil rights, they put a man on the moon. My generation created YouTube, Google, and we’re so far behind the generation before us. In terms of actual events, they formed the world, we just live in it. I think that’s a cultural similarity among everybody.

Actually it’s not set in L.A., it starts in L.A. The entire piece is a telephone piece. All four characters — it’s an ensemble piece — are in different places. After the father does a number on his son, he goes on to do emotional gut punches to his daughter and his wife, to kind of stir them up and break their apathy.

The characters draw out the culture of self-entitlement, of being sheltered on different levels, which speaks to the culture that we live in now.

I agree. We do live in tribalism, we really are a polarized place. If we want to go out and find the things to disagree with, it’s easy. The concept behind “First World Problems” is, this is the only Asian family we see in the piece, with the exception of an ex-boyfriend who pops up. A lot of these issues we wouldn’t normally be able to tackle, like tribalism, classes, ethnicity, creed, religion — these Asians are right in the middle. And hopefully we’ll be able to tackle a whole bunch of stuff, because we have more in common than we don’t.

Woody Pak is the producer of them. Years ago he asked me if I could help film a tiny little docuseries. So we shot with those guys, we did it in my driveway. I thought, ‘These guys are really good, I wish these guys a lot of luck,’ and did some promotional pieces for them. And the song stuck in my head, and it kind of fit the theme of the show. Not to mention that it’s done by four really talented (five including Woody) Asian Americans.

Are they still together?

I hope so too. What’s up next for you?

I have to finish writing a bunch of pieces. I have a martial arts film I really want to do. Usually when you get into a martial arts films, you think, “What are you gonna do, tae kwon do, kung fu, “Bourne Identity”-type stuff.” This is gonna be fun because it’s gonna include every single one of them. So I’m looking forward to that. 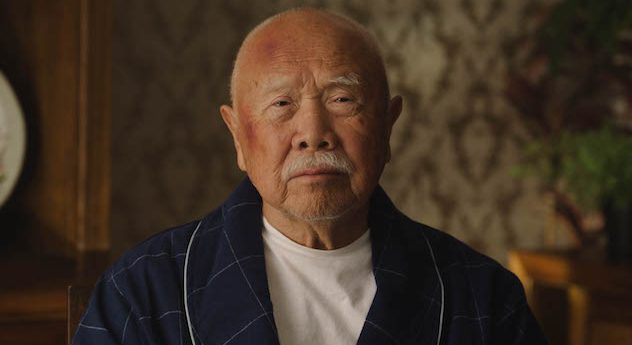 There’s more to “Kimchi” than meets the eye. At first glance, it appears to be a story about an elderly man meeting his granddaughter’s fiancée. Upon closer look, however, […]