1) CHOI SIWON
Where you’ve seen him: In the popular K-pop group, Super Junior. Oh, and starring in your favorite dreams.
Why he’s boyfriend material: Korean artist Choi Siwon is at the very top of this list for a reason. Not only is he talented (he’s an actor, model, and singer), he doesn’t let fame get to his head. If you’re looking for a gentlemanly boyfriend, Choi Siwon is your man. Known for his strong faith, his heroic deeds (take a look at him rescuing a puppy) and his undeniable kindness. And let’s not forget the killer smile and chiseled abs. Don’t lie, you like them too.

2) STEVEN YEUN
Where you’ve seen him: Taking down walkers as Glenn on The Walking Dead. Maggie, you lucky girl, you.
Why he’s boyfriend material: We’ve already given you 10 Reasons Glenn Would Make A Great Boyfriend, but as it turns out, the Korean American actor behind Glenn makes an even better boyfriend. For starters, the guy’s smart. He has a degree in psychology, but the daring man gave up that route to follow what he loves: acting. Clearly, you don’t have to worry about passion with Yeun as a boyfriend. He is the perfect example of “adorkable” and even when he describes his awkward kissing techniques, we can’t help but fall for him more. If you’re looking for humor in your relationship, Yeun is your man.

3) JEREMY LIN
Where you’ve seen him: Shooting baskets for The Los Angeles Lakers and on the big screen for Linsanity.
Why he’s boyfriend material: We’ve thought highly of him for so long that we even wrote a list of reasons Why Jeremy Lin Would Make a Great Boyfriend. This covers everything from his impressive height to his alumni status at Harvard. The story points out that “he practices what he preaches, works hard, looks like he’s genuinely enjoying himself, and never gives us the impression that he feels entitled.”

4) DANIEL HENNEY
Where you’ve seen him: Distracting you from paying attention to X-Men Origins: Wolverine, The Last Stand, and Seducing Mr. Perfect.
Why he’s boyfriend material: Aside from the fact that simply looking at Daniel Henney causes a strange desire to be in his arms, he’s also driven and ambitious. After achieving a huge fan base in Asia, he returned to the U.S. to pursue a career in Hollywood. In this interview, Henney points out that he’s willing to fight to get lead roles usually granted to Caucasians. If you’re into the ambitious type who is willing to fight for you, we’ve found your guy.

5) BRUNO MARS
Where you’ve seen him: Winning countless awards for his music and, of course, winning our hearts in the process.
Why he’s boyfriend material: It doesn’t take much to figure out that this man has a beautiful heart. We saw this when he dedicated his Grammy to his late mother, when he gave an inspirational speech for aspiring musicians, and when he personally serenaded an 11-year-old who was injured by a drunk driver. Men with big hearts make incredible boyfriends and Mars clearly has one of the biggest.

6) DARREN CRISS
Where you’ve seen him: Making you blush when he played a hot version of Harry Potter in “A Very Potter Musical” and as Blaine on Glee.
Why he’s boyfriend material: Humor, talent, stage presence, a big heart, a good sense of style, and good looks? You’ve pretty much hit jackpot if you land Darren Criss as a boyfriend. Don’t believe me? Check out our list of the Top 5 Reason We Love Darren Criss, which includes everything from his talent to his charity work and good looks.

7) SENDHIL RAMAMURTHY
Where you’ve seen him:  Being steamy in NBC’s Heroes and CW’s Beauty & The Beast.
Why he’s boyfriend material: Maybe you’re at a point in life where you’re looking for someone stable and serious (and sexy). If that’s the case, then actor Sendhil Ramamurthy is perfect. He began his adulthood with the belief that he would be going into the med field. However, during an “Intro to Acting” class, Ramamurthy fell in love with the art of acting and never looked back. Of course, acting isn’t the only commitment he’s loyal to. Ramamurthy has proven to be both a good husband and father to his two children.

8) HARRY SHUM JR.
Where you’ve seen him: In the city of rock-hard abs — I mean, on Glee as Mike Chang.
Why he’s boyfriend material: Maybe you’re looking for a boyfriend who’s upbeat and fun. Well, Harry Shum Jr. can certainly help you out in that department. In addition to his television role, he has taken on a number of passion projects, such as his interpretive dance, “Painfully Shy,” and his video series “Parallels.” A man who can manage his time, has undeniable passion, and is extremely good at moving? Yes, please.

9) KEV JUMBA
Where you’ve seen him: Cracking you up with his comedy YouTube channel. Laughter is the way into the heart, right?
Why he’s boyfriend material: Interested in men who are funny and sincerely generous? Look no further. Kevin Wu, better known as KevJumba, fits the part. His humor has given him over 3 million subscribers on YouTube, but there’s so much more to him. In 2009, he began his YouTube charity called JumbaFund and after raising over $50,000, he opened a High School in Lenana, Kenya. Now that’s a keeper.

10) MARIO MAURER
Where you’ve seen him: In Thai films The Love of Siam and First Love (because even if you don’t understand Thai, you know what a talented and attractive actor looks like).
Why he’s boyfriend material: Not only is this Thai-German actor (who is of Chinese German descent) absolutely gorgeous, he’s also a hard worker, polite, and family-oriented. Maurer is known as the lead star of Thailand’s highest grossing film of all time, Pee Mak, but he didn’t originally plan on being an actor at all. In fact, he only took up acting because he wanted to help out his family with finances (cue the collective “aww”). Luckily for his fans, he fell in love with acting and continued. 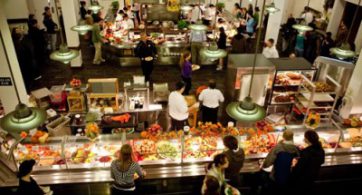 Making healthy choices when it comes to food is probably not too high on the priority list for the majority of you college students. As far as to-do lists, […]